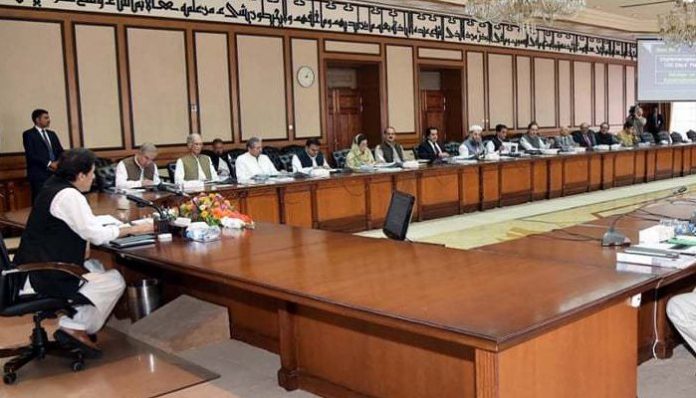 ISLAMABAD: Prime Minister Imran Khan will chair a federal cabinet meeting today at 11:30 am where he would brief the members to his upcoming visit to the United States.
The cabinet members will also discuss alleged videotape of accountability court’s judge Arshad Malik besides reviewing a six-point agenda in the meeting.
A briefing will be given on expenditures made on state heads and parliamentarians for their medical treatments since 2008 till date.
Moreover, the details of expenses will also be briefed for camp office.
The cabinet will also review the provision of on-arrival visa facility to Qatari citizens and re-structuring of the Federal Investigation Agency (FIA).
Earlier on July 3, the federal cabinet with Prime Minister Imran Khan in the chair had formally approved Hajj Policy 2019.
This was stated by Prime Minister’s Special Assistant on Information and Broadcasting Dr. Firdous Ashiq Awan, sitting beside Minister for Religious Affairs and Interfaith Harmony Dr Noor-ul-Haq Qadri, in a media briefing in Islamabad.
She said Prime Minister Khan has directed to make the Hajj policy free of all scandals.
Awan also informed media that PM Khan will himself inaugurate Hajj flight operation on July 5. It will be the first time that Pakistani pilgrims will leave Islamabad airport after completing all formalities of immigration through Raod to Makkah project.
The special assistant said the cabinet has also given approval of Senior Citizen Bill 2019 to facilitate aged people of the country. An old age home will be established in Islamabad, which will be later extended to other parts of the country, she added.
Dr Noor-ul-Haq Qadri said for the first time Saudi Arabia is extending e-visa facility to Pakistani Hujjaj. This year 200,000 Pakistani pilgrims will perform Hajj and the government has made remarkable arrangements for their transportation, food, and accommodation, he said.