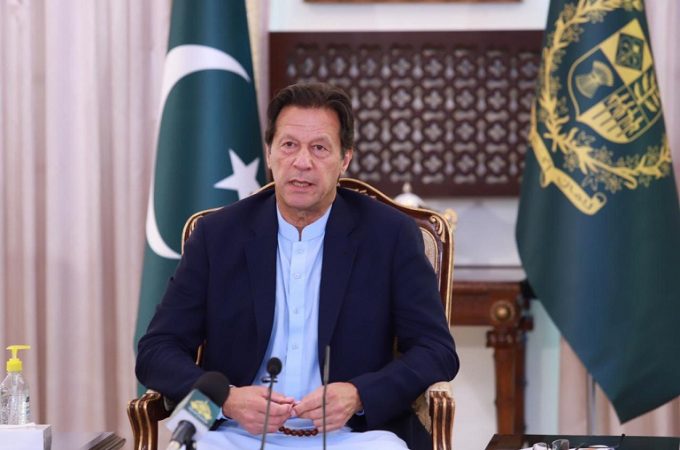 ISLAMABAD: Prime Minister Imran Khan on Wednesday said that the unregistered laborers and Pakistanis working abroad have suffered the most because of the coronavirus lockdown.
The premier spoke via video link on Wednesday at an International Labour Organisation conference.
“The conference is being held because the pandemic has hit the labor community the most,” he said. “Coronavirus cases are coming down in some countries and then peaking, while in other countries they are still peaking so it’s important for all of us to have some strategy to deal with the most vulnerable community of society: the laborers.”
He went to explain the situation in Pakistan. “We had two problems when we decided to impose a lockdown. On one hand, we had to deal with a spreading disease that we knew would overwhelm our health sector, but then we had this other problem of our informal economy.” Most people are self-employed in the country and many labourers remain unregistered because of which we are not sure of their exact numbers, he said.
“All these people became unemployed when the lockdown was imposed and their families depended on the daily/weekly incomes of these labourers,” he said. “Now, these families could not afford to eat. We had cases where vehicles distributing food were attacked by hungry people.”
Pakistan then decided to impose a smart lockdown. We banned public gatherings such as holding classes at schools, wedding halls, parks and cinemas but we allowed construction and agriculture activities, said PM Khan. “We did not stop them because then we would’ve had a huge food crisis.” Construction is important too as it employs most labourers in cities, he claimed.
The government also provided cash to these labourers under its Ehsass programme. “In Pakistan’s history, never has such an amount been transferred to so many people. It saved us from some aspects of the lockdown.” India, on the other hand, went for a curfew-like lockdown and it suffered from a major migration crisis.
“The future is uncertain. We don’t know how long the economy will take to recover from the impact of this. We are all praying for a vaccine but in the meantime, we have to think about our labourers,” said PM Khan.
Another problem we faced was Pakistanis working abroad losing their jobs. The country, like many others, depends on remittances. “We would request the countries employing these labourers to be more sympathetic. We know all countries are facing problems.” A joint strategy needs to be formed to solve this issue, he added.