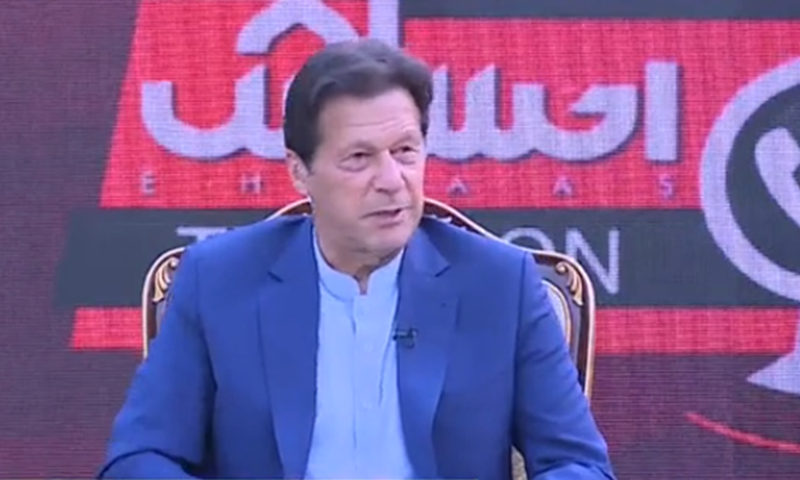 ISLAMABAD: Prime Minister Imran Khan on Thursday said that after the government conditionally allowed congregational prayers in mosques, it was now the responsibility of ulema to ensure the people follow the standard operating procedures (SOPs) for collective prayers.
His comments come amid increasingly urgent appeals from doctors who have asked the government to reconsider its decision to allow congregational prayers.
Talking to journalists during the Prime Minister’s Ehsaas Telethon, which was held to raise funds for Covid-19 relief, Prime Minister Imran said the government had initially tried to convince people to pray at their homes but it later became clear that people would go to mosques during Ramazan “no matter what we do”.
“I know my nation. I knew people had to come out [to pray] during Ramazan,” he said.
Once this was confirmed, he continued, the government decided to allow people to visit mosques but with certain conditions. He said it was also made clear at the time that the mosques would be closed if people violated the SOPs agreed between the government and ulema.
“It is now the responsibility of the ulema who gave us guarantees” to ensure the precautions are observed, the premier said.
Nevertheless, he stressed that people should pray in their homes and stay indoors during Ramazan. He also said doctors across the country were justified in demanding a strict and complete lockdown because they are on the frontlines of the battle against the coronavirus.
But he said the government had to show flexibility when ulema argued that mosques could be allowed to open with SOPs just as some other sectors, such as the construction industry, were opened with orders to follow certain SOPs.
Prime Minister Imran said that instead of issuing orders that lead to people being “beaten up and jailed” for coming out of their homes, “we as a responsible nation should place the onus on the public.”
In addition, he said, the government had the option of imposing a “smart lockdown” in areas where people are not following the SOPs for congregational prayers.
While ruling out an “indefinite lockdown”, the prime minister regretted that decisions throughout Pakistan’s history were taken for a small elite class.
He said any decisions about a sweeping lockdown should not be taken without thinking how the poor will cope with the restrictions.
Prime Minister Imran asked people to visit low-income areas and katchi abadis in Islamabad and Karachi and see for themselves how long the residents of these areas, who live in overcrowded neighbourhoods, could be kept under a lockdown.
Answering a question, he said the virus will spread even if a complete lockdown is imposed in the country. Citing an example, he said the disease had been contained in Singapore during its lockdown, but started to spread again once the restrictions were lifted.
The premier in his remarks urged citizens to practise social distancing, saying what differentiates the coronavirus from other viruses is that its rate of spread is “unprecedented”.
He stressed that “no government can solve coronavirus [crisis] on its own”, saying everyone would have to contribute to the efforts that will be needed to defeat the pandemic in the coming days.
Speaking about the government response to the health crisis, the prime minister reiterated that there is no “political interference” in the government’s Ehsaas cash disbursement programme and the entire process is computerised.
He said that he did not start fundraising to help those affected by the lockdown until he “fixed the financial controls”.
There has “never been such a transparent programme in the country’s history”, he added.
He revealed that the government is using a system for tracing suspected coronavirus cases provided by the Inter-Services Intelligence (ISI). “It was originally [meant to trace] terrorists but we’re using it to tackle corona,” the prime minister said.
He added that “tracking and testing is the only way to reopen businesses.”
Asked whether the funds collected in the Prime Minister and Chief Justice of Pakistan Fund for Diamer-Bhasha and Mohmand Dams could be diverted for Covid-19 relief, the prime minister replied: “The dam fund remains in its place. The Rs14 billion or so allocated for the dam will go that way.”
Former cricketers Javed Miandad, Waqar Younis and Wasim Akram, singer-actor Ali Zafar and actor Bushra Ansari also participated in the telethon through video call.
Akram observed that people have “become relaxed” about social distancing guidelines and urged them to “not treat the lockdown as a holiday”.