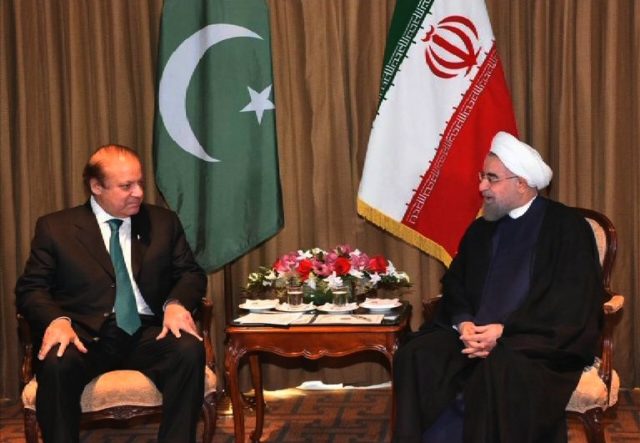 UNITED NATIONS: Prime Minister Muhammad Nawaz Sharif and Iranian President Hassan Rouhani, who met here on Wednesday, discussed bilateral relations, situation in the region as well as other matters of mutual interest.
The two leaders expressed satisfaction over the positive forward movement in the bilateral relations between the two countries.
They also expressed their satisfaction over the pace of progress in the Pak-Iran gas pipeline project.
They shared the view that Gwadar and Chahbahar seaports would be instrumental in further promoting trade in the region.
They agreed that international efforts should continue for the negotiated settlement of Syrian problem.
President Rouhani said the security of Pakistan and Iran was inter-linked and Iran considered Pakistan’s progress as its own.
He said there was a need to augment cooperation between the two countries in the area of defence. Hearts of the peopleof Pakistan and Iran beat together, he added.
President Rouhani lauded Nawaz Sharif’s vision of economic corridor and said Iran wanted to connect with the corridor. The future of two countries was bright, he added.
He also invited Prime Minister Nawaz Sharif to visit Iran.
The Prime Minister said after the lifting of economic sanctions from Iran, Pakistan desired to double its volume of bilateral trade with the neighbouring country.
He said two focal persons would be appointed on Iran-Pakistan gas pipeline and other energy projects.
Nawaz Sharif said he had been visiting Iran since 1967 and he loved Tehran and the people of Iran.
He stressed the need for removing technical impediments in the way of enhanced trade and economic cooperation between the two countries.
The Prime Minister also apprised the Iranian President of the atrocities being committed against the innocent people of Kashmir in the Indian Occupied Kashmir. Kashmiris were facing the Indian state terrorism, he added.
He also called for unity and solidarity of Muslim Ummah. – APP