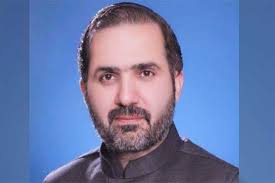 ISLAMABAD (Khyber News): The Prime Minister Imran Khan has nominated Senator Mirza Mohammad Afridi for slot of Deputy Chairman Senate. This was announced by Shibli Faraz Federal Minister for Information and Broadcasting, in a tweet.

Earlier, PM Imran Khan nominated Sadiq Sanjrani for chairmanship of the upper house of parliament as the ruling party’s candidate.