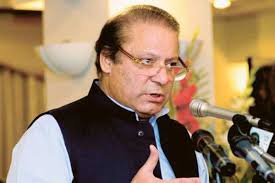 LAHORE: Prime Minister Muhammad Nawaz Sharif performed the groundbreaking of Lahore Eastern bypass at Kala-Shah Kaku on Friday evening.
Chairman National Highway Authority briefed the Prime Minister about the salient features of the project.
The 16.5 kilometer long bypass will be completed at a cost 28 billion rupees.Situated in the east of Lahore, this bypass will connect with Lahore Ring Road at a distance of 3.3 kilometer from Niazi interchange.
This bypass will start from Mehmood Booti interchange and end at GT Road and Lahore-Islamabad Motorway junction at Kala-Shah Kaku interchange. It will consist of six lanes, each having 3.65 meter width while the outer shoulder will be three meter and inner shoulder will be one meter wide.
The maximum speed limit on this bypass will be 120 kilometer per hour. The completion of the project will help to improve movement of the traffic in the city and linking areas besides promotion of tourism and trade in the region.
Minister for Defence Production Rana Tanvir Hussain was also present on the occasion.