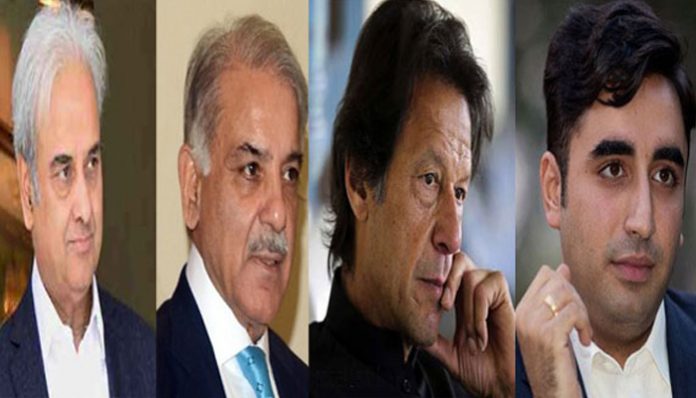 ISLAMABAD: Caretaker Prime Minister Nasirul Mulk, President Mamnoon Hussain, Pakistan Tehreek-e-Insaf (PTI) chairman Imran Khan, PPP head Bilawal Bhutto Zardari and leaders of other political parties have strongly condemned the suicide blast in Mastung that killed at least 42 people including brother of former Balochistan chief minister Aslam Raisai, Nawabzada Siraj Raisani on Friday.
President Mamnoon Hussain and caretaker Prime Minister retired Justice Nasirul Mulk have strongly condemned blast in Mastung, Balochistan.
They expressed deep grief and sorrow over loss of precious lives in the blast. They directed for providing the best medical facilities to the injured.
Senate Chairman Sadiq Sanjrani and Chief Election Commissioner (CEC) Sardar Muhammad Raza also condemned the blast on Balochistan Awami Party leader and election candidate in PB-35 Siraj Raisani in Mastung.
Sardar Muhammad Raza expressed deep grief and sorrow over death of Siraj Raisani and others in the attack.
The CEC sought report of the incident from Balochistan caretaker Chief Minister, provincial chief secretary and inspector general of police.
He directed for ensuring security to all election candidates.
Interim Balochistan Chief Minister Allauddin Marri has strongly condemned the bomb attack on corner meeting.
He has sought a report from Deputy Commissioner Mastung about the incident and instructed the concerned authorities to ensure immediate arrest of the elements involved in this heinous act of terrorism.
The Interim CM has expressed heartfelt grief and sorrow over the loss of precious lives in the attack.
Pakistan Peoples’ Party (PPP) Bilawal Bhutto Zardari has strongly condemned terrorist bombing on the convoy of JUI-F leader Akram Khan Durrani near Bannu and stressed for adequate security to the contesting candidates in the wake of growing terrorist threats.
The PPP Chairman expressed deep grief and sorrow over the martyrdom of innocent people and urged for best medical facilities for those injured in the blast.
Bilawal said providing fool-proof security to the masses and the contesting candidates was the responsibility of the caretaker government, which has to be fulfilled without any delinquency.
The PPP chairman said that people and the institutions have to unite to face the challenge of growing terrorism incidents during the election campaign.