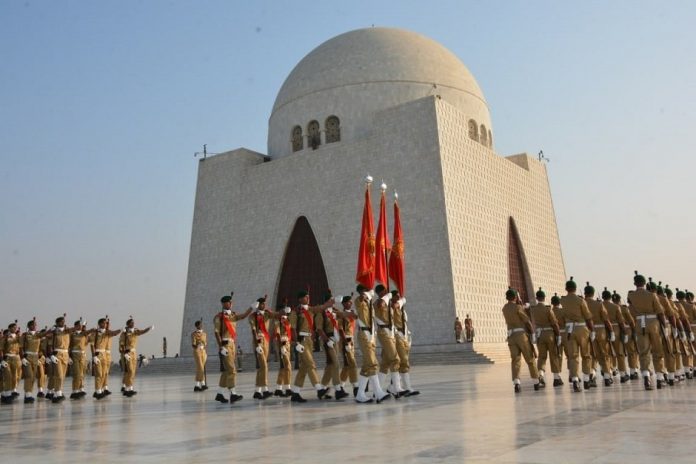 KARACHI: As the nation is Wednesday celebrating 143rd birth anniversary of Founder of the Nation Quaid-e-Azam Muhammad Ali Jinnah with traditional zeal, an elegant change of guards ceremony was held at the Quaid’s mausoleum in Karachi.
Pakistan Military Academy (PMA) cadets assumed the guards’ duties. Commandant PMA Major-General Muhammad Ali was the chief guest and inspected the contingent comprising male and female cadets.
Major-General Muhammad Ali offered Fatiha, laid a wreath of flowers and recorded his impressions in the visitor’s book. President Dr Arif Ali and Prime Minister Imran Khan’s messages were also read out on the occasion.
It is worth mentioning here that a public holiday has been declared today at all the government institutions and educational institutions and the national flag is hoisting atop all public and private buildings.
The day dawned with Qur’an Khawani at the Quaid’s mausoleum. Special programmes are being held across the country to shed light on the Quaid’s struggle for creation of Pakistan and to highlight his guiding principles of unity, faith and discipline.
Public and private organizations and educational institutions are holding functions to highlight different aspects of the life of Quaid-e-Azam. People from various walks of life are visiting the mausoleum of Quaid-e-Azam to pay homage to the founder of Pakistan.