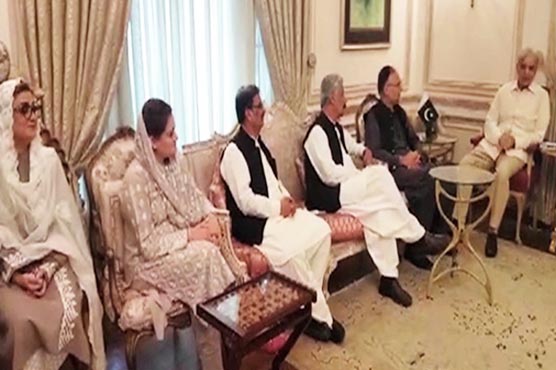 LAHORE: Pakistan Muslim League-Nawaz (PML-N) leaders on Thursday held a meeting in Lahore’s Model Town and expressed concerns over the health condition of ex-Prime Minister (PM) Nawaz Sharif, saying that government is victimizing him by delaying treatment as part of a campaign against him and his family
According to details, ex-Defence Minister Khawaja Asif, former Information Minister Marriyum Aurangzeb and provincial General Secretary Murtaza Javed Abbasi among others participated in the meeting.
While talking to media on the occasion, Khawaja Asif revealed that all the parties are worried about the health of Nawaz Sharif. Going abroad for medical treatment will be personal decision of PML-N supremo, he added.
Meanwhile, Ahsan Iqbal said that conservative thinking of the incumbent government is regrettable.
PML-N’s deputy secretary general, Atta Tarar told, “Sharif has undergone several scans and tests and doctors are still trying to find the cause.”
On the other hand, the health condition of the former prime minister has deteriorated once again as his platelet count significantly dropped to less than 7,000 yesterday.
Sources told the media that the ailing Sharif might be shifted to the Pakistan Kidney and Liver Institute today for further medical procedure in accordance with recommendation of a medical team examining his health condition.
PML-N supremo Nawaz Sharif’s platelet count recovered to 29,000 a day before after doctors had transfused four mega units of platelets into him in Lahore’s Services hospital. The doctors had earlier claimed that Sharif’s health was satisfactory but later his platelets dropped again.
PML-N spokesperson Marriyum Aurangzeb said there was no truth to rumors that incarcerated former prime minister Nawaz Sharif was going abroad for treatment.
On Monday night, Sharif was rushed to the hospital after his platelets had dropped to a dangerously low level with his doctors raising alarming concerns.
Dr Adnan Khan, a personal physician of Sharif, had raised an alarm about his deteriorating health, urging the Pakistan Tehreek-i-Insaf government to immediately shift him to hospital for treatment.