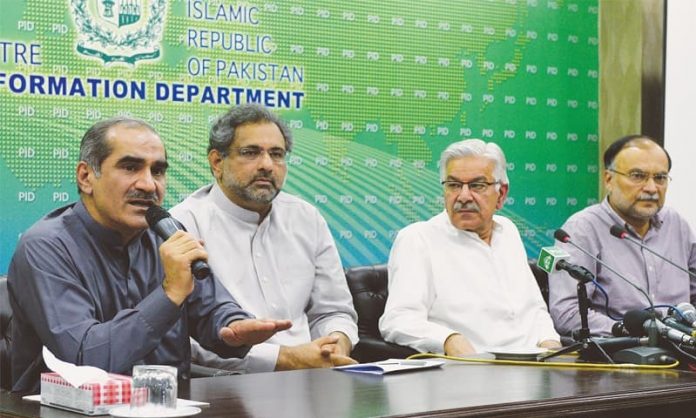 ISLAMABAD: The PML-N on Tuesday demanded a new accountability body, a day after the Supreme Court slammed the National Accountability Bureau’s (NAB) “utter disregard for law” in the Paragon Housing Society case’s detailed verdict.
Justice Gulzar Ahmed on Monday had reprimanded the anti-graft watchdog — in a detailed, 87-page ruling in Khawaja Saad Rafique and Khawaja Salman Rafique’s bail plea — over various actions and processes, saying its “conduct throughout this case is a clear manifestation of their utter disregard for law, fair play, equity, and propriety”.
Khawaja Saad Rafique, addressing a press conference flanked by PML-N leaders, said: “NAB should be abolished […] The opposition and government should legislate for a new accountability body.”
“There is no atmosphere of justice in NAB,” he said.
Rafique said that the children of those who had strived for the creation of Pakistan were mistreated. “I was disappointed with [the] justice [system], but this decision is a ‘lighthouse’ [for me],” he said, while referring to the top court’s verdict.
Taking over the press conference, former prime minister Shahid Khaqan Abbasi said the decision clearly states that NAB “is not in the [best] interest of the country”.
“NAB and the government should form a consensus over abolishing the anti-graft body,” he said, adding that the “hollowness” of the accountability drama in Pakistan has been revealed.
He questioned how “NAB is quick to grab ahold of the opposition but is blind to the corrupt ones sitting in the government”.
“The opposition is thrown in jail for years,” he said.
“The NAB chairman has served as a judge. He knows what his next step should be,” Abbasi added.
Meanwhile, Khawaja Asif said that justice prevails when people at the helm of affairs use state institutions to satisfy their “ego”.
“Justice prevailed in Saad Rafique’s case, and it will be remembered in the future as well,” he said, adding that the ones who seek justice will quote this decision in books.
“I salute the judiciary […] This is the beginning of a process that has affirmed that justice will prevail in the future,” Asif said.
Throwing his weight behind the journalist fraternity, the PML-N leader said that the party would use all options of protest available to support press freedom, inside and outside the Assembly.
“Everyone should have freedom of speech and writing,” Asif said.
The PML-N stalwart said that he had taken an oath of allegiance to the Constitution and that he would “fulfil it”.