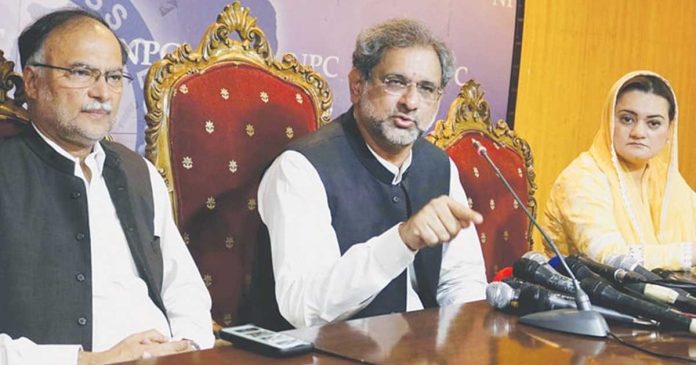 ISLAMABAD: Pakistan Muslim League-Nawaz (PML-N) has demanded the resignation of the Prime Minister. Party leaders said that Imran Khan should admit his failure to run the country and go home. They said inflation has turned into a tsunami for the common man especially the newly added taxes on petroleum products.
Talking to media along with Khawaja Asif and Ahsan Iqbal, Shahid Khaqan Abbasi said that on May 31, 2018, when their government’s term ended, Pakistanis used to buy petrol at Rs 72.11 which was taxed and sold at Rs 87.70 while today, the actual price is Rs 55 and taxes are more than Rs 44. He said that the petrol costing Rs 55 to 56 should be be sold at Rs 67, at most.
The PML-N leader further lamented the hike in petrol prices as the economy is already in shambles. He said the 34 per cent increase in petrol prices has added to the government’s failures and put a mammoth burden on the public.
Khawaja Asif said that Imran Khan tweeted on petrol in 2013 and 2018 and criticized our government regarding petrol prices demanding resignations. If he has the courage, he should now resign as well, Asif added. He said that the storm of inflation will not stop here but we will work out a joint strategy with all opposition parties to rid the people of Imran’s ego.
PML-N leader Ahsan Iqbal said that the government imposed additional taxes on petroleum products through the back door, this sudden increase in the price of petrol will have long reaching effects. The increase of Rs 25 in petroleum products is a deadly blow to the country’s economy, he added.