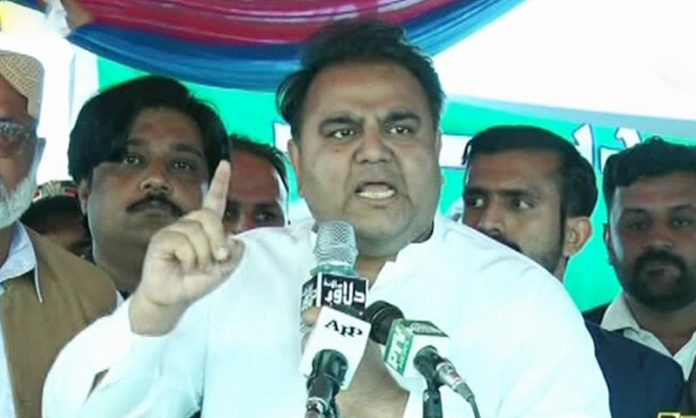 JHELUM: Information Minister Fawad Chaudhry on Sunday shot back at the opposition regarding its criticism of the government over medical treatment of incarcerated former prime minister Nawaz Sharif, saying they were doing politics on the health of the PML-N supremo.
Addressing a public gathering in Jhelum, he said Sharif’s continued refusal to be shifted to the hospital of his choice for treatment of his cardiac disease made it seem like it wasn’t a matter of treatment, “but of politics”.
“Nawaz Sharif might not be doing this himself, but there is a section within N-league that is doing politics on his health because they have no public issue on which they can do politics,” the minister alleged.
He also responded to the statement given earlier in the day by senior PPP leader Syed Khursheed Shah, who said Sharif was not in a good health and “if something happens to him it would be murder for which Imran Khan will be responsible”.
“You are not worried about Nawaz Sharif, you are concerned about yourself being sent to jail,” Chaudhry retorted, addressing Shah. He was the “misdeeds” committed by the PPP leader were before everyone to see.
The minister said there was currently no real bone of contention between the government and the opposition, except that the former wants the latter to be held accountable for the way the nation’s money was used by them.
“We say, ‘don’t cry, answer for [the money]’ (Naa ro, hisaab do), they [the opposition] say NRO,” he told the gathering, alluding to a National Reconciliation Ordinance-like deal with political rivals.
Sharif is serving a seven-year jail term awarded to him in the Al-Azizia corruption case at the Kot Lakhpat jail. In recent days, his family members and PML-N leaders have raised concern about the former prime minister’s reportedly deteriorating health and treatment options available to him.