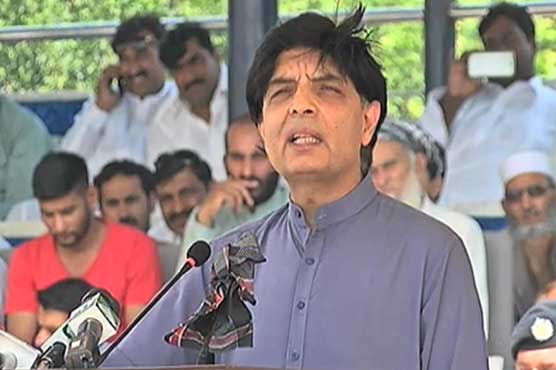 RAWALPINDI: Pakistan Muslim League (Nawaz) on Sunday nominated candidates against its disgruntled leader Chaudry Nisar Ali Khan for the constituencies, NA-59, NA-63, PP-10 and PP-12.
The party has issued party tickets to Raja Qamarul Islam for NA-59 and PP-10; while Mumtaz Khan has been fielded in NA-63. The party has given its go-ahead to Faisal Qayyum Malik for the PP-12 constituency.
Meanwhile, Chaudhry Sarfaraz Afzal, Raja Sarfraz Asghar and Zeeshan Siddiq Butt will contest for PML-N in PP-13, PP-20 and PP-19, respectively.
In a press conference on Friday, Nisar said that that he was not angry and had only differed from former prime minister Nawaz Sharif. “Someone says I am angry, but I am not. I have differed from Nawaz,” he said, adding that he was affiliated with the PML-N workers and leaders.
Chaudhry Nisar to contest General Election 2018 as independent candidate
“Had I revolted then I would have been more vocal,” the former interior minister said. “I may be wrong but I differed for the betterment of Nawaz Sharif.”
He said that he had decided to speak of his differences with the former premier once the condition of Begum Kulsoom Nawaz improves.
“I’m a human being, mistakes are made…but my intention is true,” Nisar said. “I have 34 years of association with Nawaz Sharif and I gave him whatever suggestion was necessary.”
He said that it was this time that his affiliation with Nawaz was affected and he would explain that later. “Being really honest requires a person to speak to his leader keeping ground realities in view.”