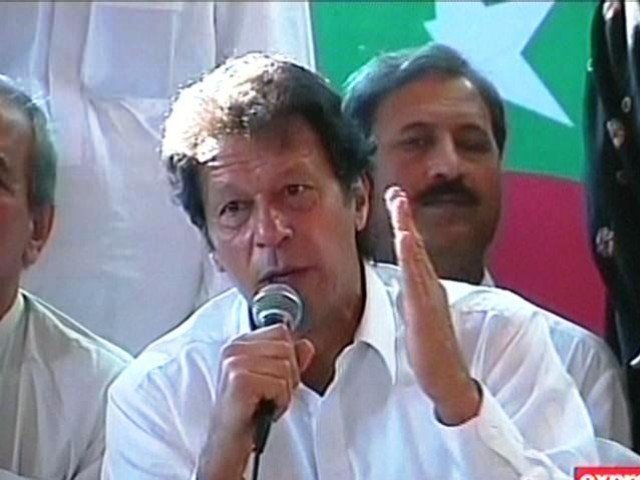 ISLAMABAD: Pakistan Tehreek-e-Insaf Chairman Imran Khan on Monday alleged that Pakistan Muslim League-Nawaz (PML-N) government is destroying democracy to protect country’s biggest thief. “They are destroying the democracy. They have formed a law to protect a criminal” he said while referring to the Electoral Reforms Bill 2017.
While addressing a press conference in the federal capital, Imran Khan said that he is being compared to the most corrupt man in the country. He further said that propaganda is being created and his case is being portrayed in the same light as that of former prime minister Nawaz Sharif. “They think that if Nawaz is a thief, then Imran Khan must be one as well,” he added.
“I am ready for accountability,” he said, adding that he is submitted his money trail to the Supreme Court. “I have submitted all the documents pertaining to the money I earned abroad for 20 years,” he remarked.
On the other hand, Sharif family have failed to provide any details of their properties. “Nawaz Sharif’s children become millionaires at a young age,” PTI chief reiterated. “Is there any country in the world which allows a man who has been disqualified is allowed to head a party?”
He also stressed that the PTI will make all efforts to the stop the Electoral Reforms Bill. “If PML-N tries to bulldoze our attempts then we will reach out to the people,” he said, adding that PTI has had a lot of practice holding protests.
Party chief did accept that PTI could have taken more efforts to stop the bill. “We have given a warning to two of our senators too.”
PML-N leaders are destroying Pakistan’s laws and institutions, he said adding “We must go towards elections. They are not saving democracy, rather hiding their own corruption and incompetence. They are klepto-crats not democrats.”
Speaking over the matter pertaining to the opposition leader, he said “[PTI leader] Shah Mehmood Qureshi should become the opposition leader.” However, he added, this decision is not up to PTI rather the party has to take a decision after taking other parties into confidence.
On Rangers stopping PML-N lawyers and other politicians from entering the judicial complex, where accountability court was hearing Nawaz Sharif’s case, Imran said that the entire incident was “staged”.
“How was [interior minister] Ahsan Iqbal unaware of SSP’s letter to the Rangers,” he asked. On Ahsan Iqbal’s harsh statements, he said it is nothing but “obstruction of justice.”