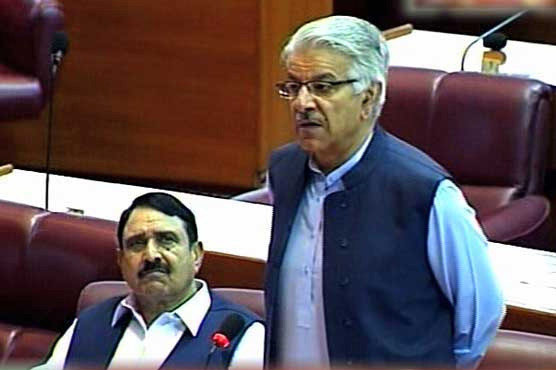 ISLAMABAD: Pakistan Muslim League-Nawaz (PML-N) leader Khawaja Asif has said we are Nawaz Sharif’s guaranteers, he will return back home after treatment.
Speaking at the floor of the National Assembly, Khawaja Asif said Nawaz Sharif is seriously ill and needs to be treated abroad, according to the suggestions of the doctors.
He claimed that the government started playing politics on the matter when Nawaz Sharif agreed to fly abroad for his treatment. “Sharif was given relief by the courts on medical grounds.”
The PML-N stalwart said the government will be responsible if anything happens to PML-N supremo.
Commenting on Federal Minister for Law and Justice Farogh Naseem’s statement, Khawaja Asif said, the minister had different arguments in Musharraf case and now his version is different.
Earlier, federal cabinet’s subcommittee had allowed former prime minister Nawaz Sharif to travel abroad for medical treatment for four weeks, but after submitting surety bonds.
Federal Minister for Law Farogh Naseem, while addressing a press conference in Islamabad had announced that PML-N President Shahbaz Sharif, who had appealed for permission, will have to submit an indemnity bond to the tune of around 7 billion rupees to avail the concession.