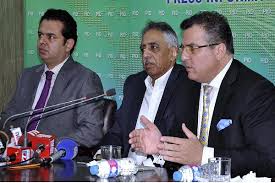 ISLAMABAD: Representatives of Pakistan Muslim League-Nawaz (PML-N) have branded Imran Khan, Chairman of Pakistan Tehreek-e-Insaf (PTI) the king of corruption and stated that sit-in won’t succeed by purporting support of a ‘third force’.
Member of National Assembly (MNA), Talal Chaudhry and Minister of State for Privatization, Muhammad Zubair said that they were demanding answers from Imran Khan on public platform. Chaudhry alleged Khan of attempting to meet ‘aims’ under garb of accountability. He said that Khan’s demand of Panama leak probe by Supreme Court was met and he no basis to protest in Islamabad.
Those who wish to riffle through others’ pockets were not prepared to get theirs’ riffled, he said.
Chaudhry raised concerns over Imran Khan’s source of income while lambasting him for trying to achieve dubious goals.
The representatives of PML-N claimed that besides the locals, government vehicles of Khyber Pakhtunkhwa (KP) would be seen at the forthcoming sit-in on November 2.