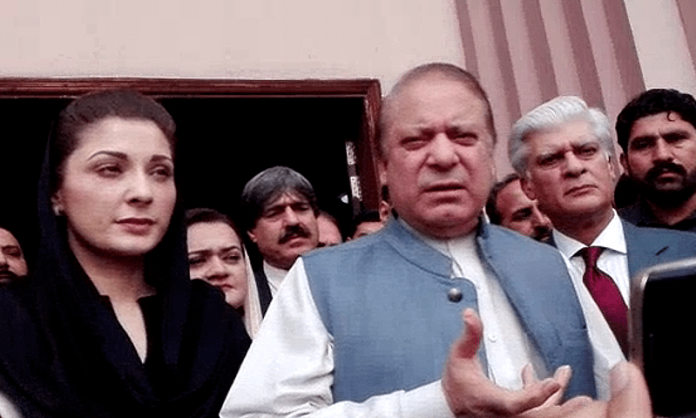 ISLAMABAD: Former prime minister Nawaz Sharif on Monday remarked that the Pakistan Muslim League-Nawaz (PML-N) was only responsible for its tenure adding that the party is not responsible for the current energy crisis.
Talking to media outside accountability court, Nawaz Sharif claimed that when they left, everything in the country was fine. He shared that the PML-N government, which completed its constitutional tenure on May 31, had generated additional electricity and inaugurated many development projects.
The country was in good hands when PML-N was ruling, the ousted premier said.
“[Former prime minister] Shahid Khaqan Abbasi and [Chief Minister Punjab] Shehbaz Sharif inaugurated many projects before the tenure ended,” he remarked, adding that he had hoped to inaugurate motorways in Lahore, Multan and Sukkur as well. “We initiated 39 mega projects in country. Has anyone even done this before? Did anyone else build motorways?”
People know who the people who brought about darkness and who brought light, he added.
On May 28, Nawaz had compared the fake plane hijacking case against him with National Accountability Bureau’s references and termed them both as a ‘joke’.
Nawaz remarked that the nation neither accepts the plane hijacking case nor the current cases against him.
Nawaz Sharif has time and again remarked that he was implicated in a ‘false and fabricated case of plane hijacking’ and confined to Attock jail in 1999. The deposed premier was then exiled to Saudi Arabia for seven years.
He also remarked that his statements and stance will prove to be victorious. “Victory is the future of my statements. There is no other option than victory.”
Reiterating his earlier claims, he said that Pakistan Muslim League-Nawaz is the only party which worked for people. “The performance of all others parties is next to none.”
Referring to Pakistan Tehreek-e-Insaf chief, Nawaz remarked: “Please Imran Khan, tell us which project have you completed? If there is any project on social sector and electricity then please tell us.” He added, “only the centre has performed.”