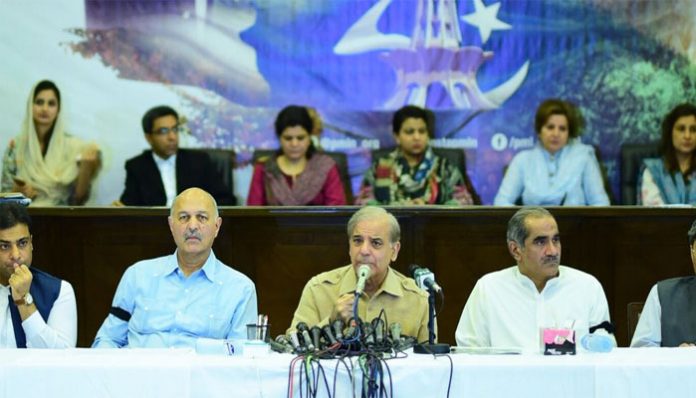 LAHORE: Pakistan Muslim League-Nawaz President Shehbaz Sharif rejected the election results, in the wake of strenuous reservations expressed by all mainstream political parties against the polling process.
“I have received complaints from all over Pakistan,” the former Punjab Chief Minister said in an emergency press conference. “What happened today took Pakistan 30 years back. I have never seen such a horrendous situation in my entire political career.”
The former Punjab chief minister said that the PML-N’s polling agents were thrown out during the vote count and were not given form 45.
“I recieved complaints from many areas that the polling agents were not given form 45. Our agents were thrown out from Dera Ghazi Khan,” he added.
The PML-N president alleged that election results on the constituencies of Ayaz Sadiq and Pervaiz Malik have been put on hold.
“We will decide the further course of action after taking a decision in our Central Working Committee session,” he announced.
Speaking on the occasion, later, PML-N leader Mushahid Hussain Syed called the polls, ‘a selection rather than an election’.
“It has been the first time in Pakistan’s history that as many as five political parties are expressing the same reservation,” Syed said. “This has been dirtiest election in Pakistan’s history.”