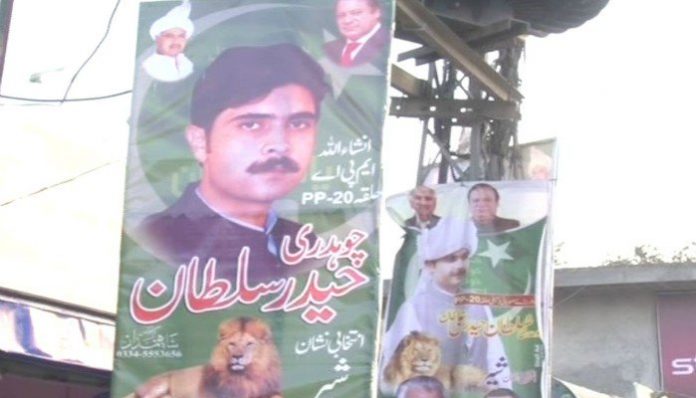 CAHKWAL: The ruling Pakistan Muslim League-Nawaz (PML-N) has retained PP-20, Chakwal-I, seat with a thumping victory, unofficial results show.
According to unofficial results obtained from all polling stations, Chaudhry Sultan Haider Ali of PML-N has taken a decisive lead by bagging 75, 655 votes while his rival candidate PTI’s Tariq Afzal stood second with 45, 702 votes.
The PML-N candidate took a massive lead of over 29,000 votes.
The biggest surprise was that Tehreek-e-Labaik Pakistan (TLP) candidate Chaudhry Nasir Abbas managed to collect some 16, 112 votes.
The voting that started at 8 am continued till 5 pm without any interval.
The seat was hotly contested by Pakistan Tehreek-e-Insaf’s Raja Tariq Fazal and PML-N candidate Haider Sultan.
According to a notification of Election Commission of Pakistan (ECP), at least 227 polling stations were set up for the 279,530 registered voters.
Out of 814 polling booths, five were declared highly sensitive and 45 others as sensitive.
The seat fell vacant after the death of Pakistan Muslim League-Nawaz’s Liaquat Ali Khan.
Personnel of Rangers and police stood guard at the polling stations to ensure security.
The Election Commission has established a control room for receiving preliminary results of Chakwal by-election.
The control room, established at Room number-107, would work from 800 to 1800 hours under supervision of director elections and receive polling day complaints, a press release said.
The complaints could be registered on phone number 0519218527 and fax number 0519205300.