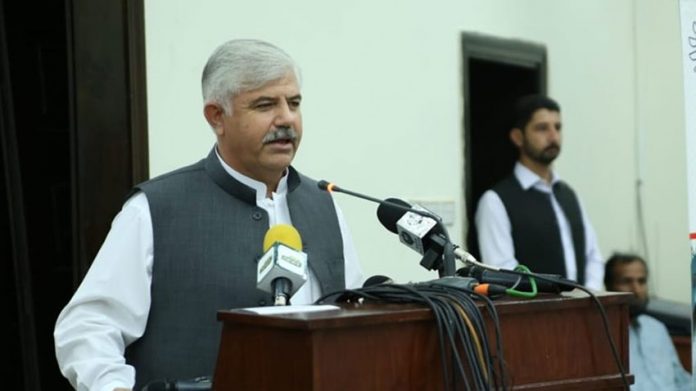 PESHAWAR: Chief Minister Khyber Pakhtunkhwa Mahmood Khan says Prime Minister Imran Khan’s vision to boost agriculture will help strengthen economy of the country.
Addressing the launching ceremony of Prime Minister initiative for Backyard Poultry in Peshawar on Monday, he said Agriculture Emergency Programme is aimed at supporting poor segment of the society especially women.
Mahmood Khan said provincial government has recently started a programme to provide cheap electricity to industrial units in the province.
The Chief Minister said some political leaders are out to bring people on roads to disrupt the process of development and prosperity of the country.
Federal Minister for Food Security and Research Sahibzada Muhammad Mehboob Sultan who was also present on the occasion, said PTI has launched mega projects to strengthen economy of the country.
Advisor to Prime Minister on Establishment Arbab Shahzad said three hundred billion rupees will be spent on promotion of agriculture in next four years through National Agriculture Emergency Programme in the country.
PTI leader Jahangir Khan Tareen also spoke on the occasion.