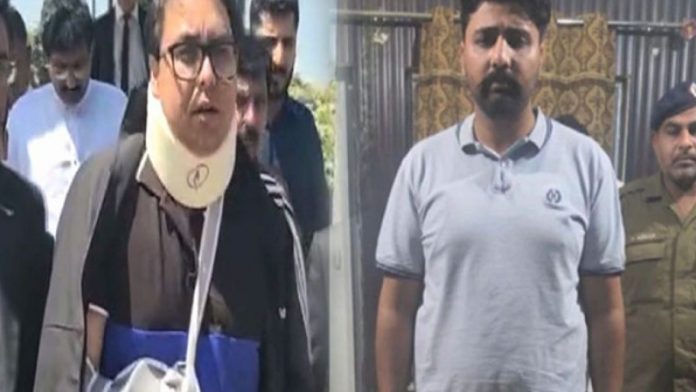 The police while sharing details of the vehicle that was involved in the accident said that it was owned by Tahir Nazir, who is a resident of Muridke, however, he had given his vehicle on rent to a man named Wajahat Ali.

“Wajahat Ali was traveling with his family when he met an accident,” the owner told police as authorities arrested the suspect and also took possession of the vehicle.

The arrested man told police that he had not committed the act intentionally, it was just an incident.

Wajahat Ali claimed that he stopped at the incident site briefly but later ran away out of fear after he saw Shahbaz Gill coming out of his vehicle.

Police after statements from the suspects concluded that evidence and probe point it to be an accident which occurred due to negligence of Wajahat Ali. They further clarified that it was not a premeditated attempt to hit Shahbaz Gill’s vehicle.

“We are handing over the suspect to Hafizabad police for further probe,” the police said.

Meanwhile, the police have also registered an FIR against the incident at Kaleke Mandi police station in Hafizabad on the request of Jabir Ali, a resident of Lahore.

Shahbaz Gill, who sustained injuries, was travelling from Lahore to Islamabad with his friends when his car turned turtle after hitting another car from back at Salam Interchange on Motorway.

Following the road accident, Dr Shahbaz Gill stated that he had escaped an “assassination attempt”, adding that his car was chased and deliberately hit under a plot.