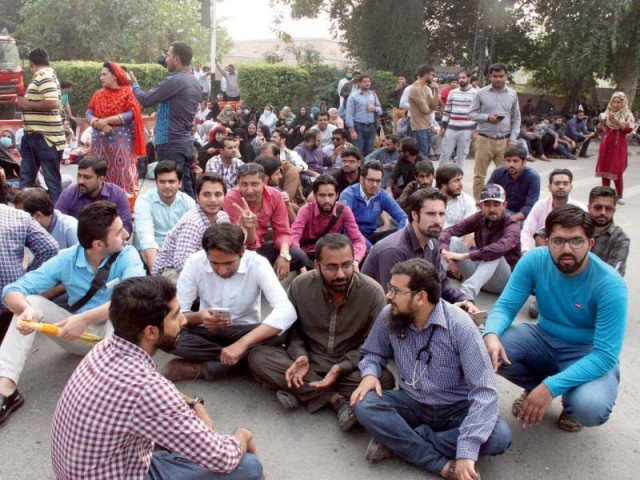 LAHORE: An ongoing young doctors’ sit-in on The Mall of the walled city entered its fifth day on Saturday but almost lost its impact after police forced them and a group of protesting water board management employees to move from the area, clearing a way for the locals to resume their normal activities after four days of annoyance.
Traffic has now been resumed on The Mall as the demonstrators have now fixed their camps near the Government Officers Residence (GOR) Gate.
The 19th day of the young doctors’ strike followed by a sit-in after the provincial government officials failed to give an ear to their issues took a heavy toll on the already distressed patients.
At least three patients including a young girl lost their lives due to their sit-in on The Mall near Club Chowk.
The strike of only a faction of young doctors at the Mayo Hospital almost died out on Friday after the health department initiated a crackdown against them and even terminated several ‘absentees’ including nurses for not heeding their warning.
The young doctors’ protest suffered a setback when a majority of them resumed duties following a threat by MS of the Lahore hospital to appoint new medics in their places.
The emergency ward and the outpatient department of the hospital were soon opened yesterday which remained operational throughout the day after anger triggered over the death of a girl child and when senior doctors took charge.
However, a few young doctors were still protesting but their number was reducing with lowering temperatures and mounting pressure from the government.
It was not the first time that the young doctors were protesting in Lahore. On several occasions in the past as well they have shutdown emergencies and wards, forcing authorities to meet their demands.