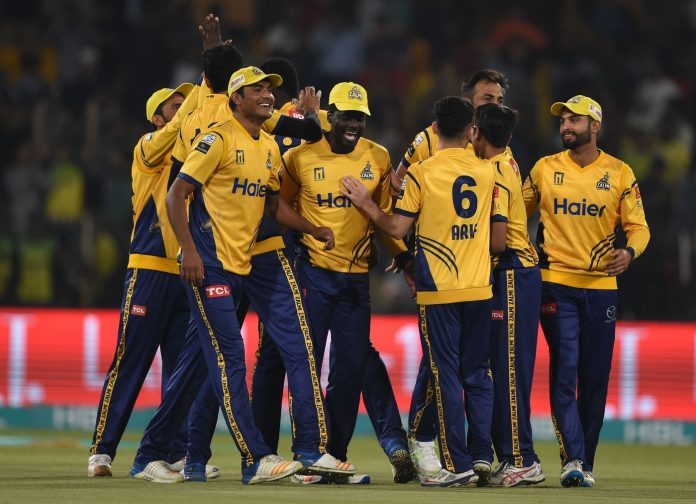 DUBAI: The tall fast bowler of Multan Sultans, Mohammad Irfan removed Kamran Akmal in his first after conceding a boundary on a short ball, as the wicketkeeper-batsman looked to replicate his stroke on the next delivery, he skied it and Mohammad Ilyas took a good running catch.
Imam Ul Haq kept Peshawar Zalmi on track with the rotation of strike and occasional boundaries. On the other hand, Dawid Malan kept the scoreboard ticking and they both contributed 68 runs together before the latter one fell after scoring 38 (35).
After losing his partner, Imam continued in his merry and had a handy 40-run partnership with Liam Dawson. The all-rounder scored 18 runs.
Imam scored another half-century in the Yellow, it seemed like he will take Zalmi over the line. But a brilliant swinging yorker from Junaid Khan got the better of him as he was trapped in front of the wicket. However, it looked like a no-ball, but the umpire gave his decision in favour of the bowling side, he scored 52 (44)
In the 18th over, Zalmi required rate had crept up to over 11, but after bowling two dot deliveries to the big man, Kieron Pollard, he hit four consecutive sixes to Mohammad Irfan which brought the equation of 7 off 12 balls with six wickets in hand.
Though, Pollard fell in the next over after scoring quickfire 25 off 10 balls, but the task was too easy for Darren Sammy and Wahab Riaz to complete.
Peshawar Zalmi registered the win the by five wickets.
The pick of the bowlers for Multan Sultans were Junaid Khan and Daniel Christian who took two wickets each, while Mohammad Amir struck once.
Peshawar Zalmi’s fast bowler, Hasan Ali shined once again with the ball as he took four for 17 runs wickets to restrict Multan Sultans to 145 runs.
Darren Sammy won the toss and invited Sultans to bat first. Hasan Ali justified his captain’s decision as he removed the dangerous opening batsman, James Vince on a golden duck.
The left-handed batsman, Umer Siddiq had a handy 80-run partnership with his Carribean batting partner, Johnston Charles who scored 20 and 53 runs respectively in the game.
However, as Siddiq lost his wicket, Sultans lose quick wickets, leaving them reeling at 117/4. The skipper Shoaib Malik, the senior pro Shahid Afridi and Daniel Christian scored 22, 14 and 17 runs respectively.
Sultans’ lower middle-order turned out to be a complete flop as they crumbled from 140/5 to 145 all out in their quota of 20 overs.
Other than Hasan Ali’s four-for, Wahab Riaz, Umad Asif, Sameen Gul and Liam Dawson took one wicket each in the match.