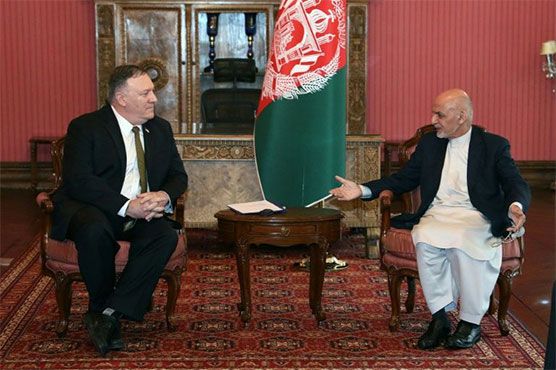 DOHA: US Secretary of State Mike Pompeo on Monday slashed aid to Afghanistan’s government after a mission to Kabul failed to bridge a divide between feuding leaders as he moved forward with the Taliban on a deal to pull troops.
Pompeo made the surprise trip in hopes of reviving a landmark US accord with the Taliban to end America s longest war and, stopping in Qatar on his way back, became the highest-ranking US official ever to meet the Islamist insurgents.
In stark criticism of a government backed for nearly two decades by the United States, Pompeo voiced disappointment that President Ashraf Ghani and his rival Abdullah Abdullah could not bridge their differences when he met them in Kabul.
“Their failure has harmed US-Afghan relations and, sadly, dishonors those Afghan, Americans and Coalition partners who have sacrificed their lives and treasure in the struggle to build a new future for this country,” Pompeo said in a statement.
Pompeo said that the United States was immediately reducing $1 billion in aid and would pull another $1 billion in 2021.
He said the United States would consider further cuts, including withdrawing support at any future donor conference.
Pompeo also assured that the United States would go ahead with its pullout of troops from Afghanistan, with a goal of removing all 13,000 by next year.
Officials said Pompeo later met for an hour in Qatar s al-Udeid Air Base, which is also home to US forces, with three Taliban leaders including Mullah Baradar, a formerly imprisoned insurgent who has become their chief negotiator.
Pompeo had flown to Doha for the February 29 signing of the accord with the Taliban but had not met then with the militant group, which has not given up its campaign of violence against the Afghan government or gone ahead with promised talks with Kabul.
But Pompeo said that the Taliban had abided by its promise not to attack US forces — and that the United States would keep up its commitment.
“They committed to reducing violence and they ve largely done that,” Pompeo told reporters on his plane.
On a US withdrawal, “we re moving down that path as long as these violence levels remain beneath the threshold.”
Kabul has been enmeshed in a political crisis since elections last year left the country in disarray due to numerous fraud claims that ultimately saw two men claiming the presidency and holding separate inaugurations.
Pompeo held separate and joint meetings with Ghani — officially elected to a new term — and his archrival Abdullah, who also claims the presidency.
US officials have long criticized Kabul authorities of corruption but Pompeo s mission is sure to send a loud message at a time that President Donald Trump has praised the Taliban s efforts.
Speaking to reporters, Pompeo said he remained optimistic about Ghani and Abdullah reaching a deal.
“I think we are closer to it than ever before,” Pompeo said.
“We will continue to cajole, to coach, and to incentivize them to have negotiations where all of the Afghans are sitting at the table.”
The last Afghan election in 2014 also ended in an impasse between Ghani and Abdullah, which ended when the then US secretary of state, John Kerry, flew to Kabul to broker a power-sharing agreement.
Pompeo also faulted the Afghan leaders for not establishing a national team to meet with the Taliban. The US-Taliban declaration had called for talks to begin on March 10, likely in Norway.
But the two sides had appeared to be making at least some progress on one key step toward talks — a prisoner exchange.
Zalmay Khalilzad, the US negotiator who brokered the deal with the Taliban, said the government and insurgents on Sunday spoke via Skype video-conferencing to discuss logistics of a swap.
The deal envisioned the release of up to 5,000 Taliban fighters held by Kabul, and up to 1,000 members of the Afghan government forces in insurgent hands.
After initially refusing to release the Taliban prisoners, Ghani announced that the authorities would free 1,500 insurgents as a “gesture of goodwill” with plans to free another 3,500 prisoners after the talks are underway.
The Taliban rejected the offer.
In the deal, the Taliban also committed to fight jihadist groups like Al-Qaeda — the initial reason for the 2001 US invasion.
Khalilzad said that the prisoner issue was increasingly urgent due to the coronavirus pandemic.
The pandemic has slowed the first phase of the US withdrawal and Afghanistan is bracing for more cases as tens of thousands return from Iran, one of the hardest-hit countries. …Agencies