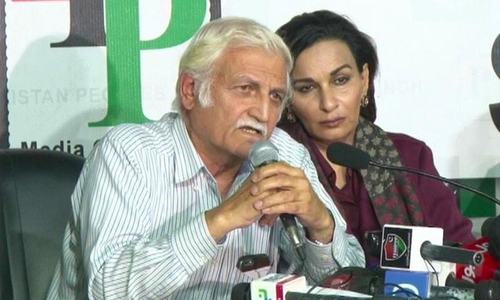 ISLAMABAD: Pakistan People’s Party (PPP) leader Senator Chaudhry Aitezaz Ahsan said that federal government of PMLN has bitterly been puzzled after Panama Leaks that led to demands for the probe.
The federal government has since then reacted insanely and a complete portrayal of that absolute puzzlement was witnessed in Islamabad when the youth were subjected to manhandling by Police and Frontier Corpse.
The Sharif family has fully realised they are in an awkward situation after they have been exposed of investing wealth in off-shore companies on which the Prime Minister, his son and daughter and country’s minister for internal affairs had stated opposite to each other.
He was addressing an exigent news conference at PPP Media Cell Sindh Saturday evening. He was accompanied by leader of opposition in National Assembly Syed Khursheed Shah, Senator Farhatullah Khan Babar, Sheri Rehman and Senator Saeed Ghani while Ghulam Qadir and Zulfiquar Ali Kaim Khani were present.
Ahsan said that despite the fact the PPP has assorted reservations with the PTI, the party would still not stop condemning the brutality against peaceful workers of the PTI by the government.
On the issue of resignation of federal minister for information Pervez Rasheed, he said that the sacking of the Senator Rasheed was itself a manifest of a situation in which the PM is also in trouble.
He said the PPP Chairman Bilawal Bhutto Zardari had laid four points before the federal government, which the later did not consider and could escape this overwhelming situation of today if it had listened to Bilawal Bhutto Zardari.
Speaking on the occasion, Senator Babar said that the meeting of PPP top leaders with the Chairman had deliberated on various issues especially on the National Action Plan (NAP) and is convinced that the federal ministry of interior affairs and the minister concerned have utterly failed to implement it.
The sheer failure in implementing the NAP calls for immediate resignation of the minister concerned and in case the interior minister shows resistance, the PM should step forward and take his resignation, instead.
He said it was very unfortunate that the interior minister not only allowed the banned organisations to operate freely but had held a meeting with leaders of such banned organisations. The overall situation is that the federal government is unwilling to take action against the terrorist organisations.
Sheri Rehman said that the situation could be different as is today provided that the federal government had allowed the Bill on investigations on corruption across the board as the Bill was duly signed by 9 major parties of the country.
She lambasted the federal government over its silence over atrocities by the Indian troops in Kashmir and said that the army is responding amicably on all fronts while it should be the civilian government to react but failed.
She said it is the duty of the federal government to carve out a way between the Lockdown and the Crackdown.
While responding to questions, Syed Khursheed Shah said that the overall situation in te country was very fragile and anything could happen.