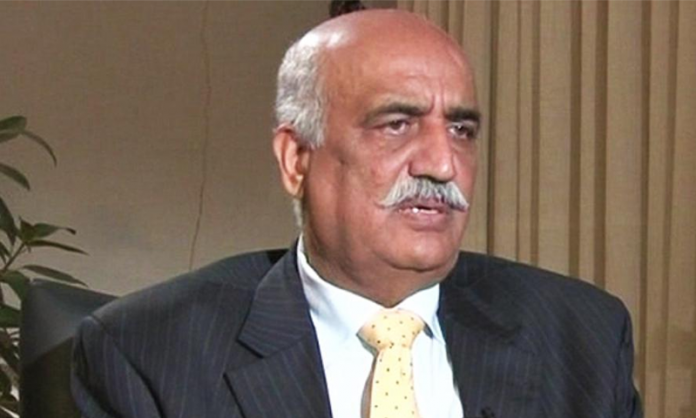 SUKKAR: Opposition leader in the National Assembly (NA) and Pakistan People’s Party (PPP) leader Syed Khursheed Shah on Sunday said that party Co-Chairman Asif Ali Zardari did not reject Mian Raza Rabbani as Senate Chairman.
Addressing a ceremony in Sukkar, he said that Asif Ali Zardari had responded to the offer of former prime minister Nawaz Sharif regarding Senate Chairman.
Shah also revealed that PPP held no required majority for electing the Chairman of Senate adding that it could gain the majority by uniting the opposition parties.
Earlier, a leader of PPP Dr. Qayum Soomro while addressing media claimed that his party had secured the majority to elect the Senate Chairman.
The opposition leader maintained that his party had established contacts with Jamaat-e-Islami (JI) Chief Siraj-ul-Haq and Pakistan Muslim League-Q (PML-Q) senior central leader Choudhry Pervaiz Elahi adding that it would be difficult for PPP to elect the Chairman of the upper house without the opposition parties.
It is worth noting that political parties have started consultations and holding meetings to secure majority for electing the Senate Chairman.