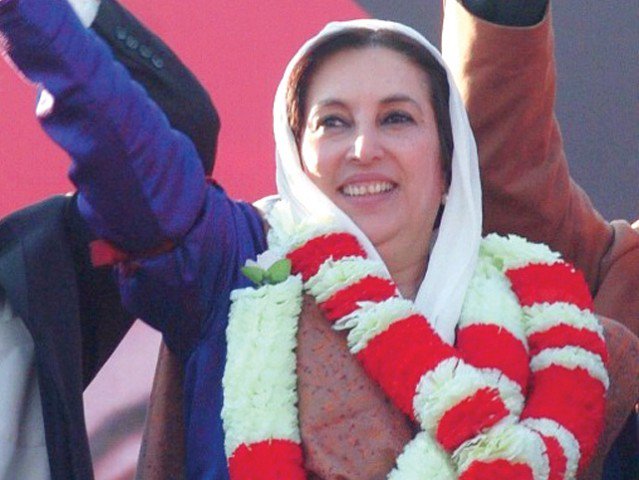 KARACHI: Pakistan Peoples’Party (PPP) has finalized arrangements to observe the 10th death anniversary of the assassinated chairperson and former Prime Minister Shaheed Mohtarama Benazir Bhutto on Wednesday in Garhi Khuda Bakhsh Bhutto.
PPP will start function of the anniversary at 1.00 p.m on December 27, 2017(Wednesday), there will be a public meeting to be addressed by the Chairman of PPP Bilawal Bhutto Zardari, Former President and Co-Chairman of PPP Asif Ali Zardari, Syed yousif Raza Gilani, Nisar Ahmed Khuhro, Chief Minister Sindh Syed Murad Ali Shah and Central leaders of PPP at Garhi Khuda Bakhsh Bhutto.
A documentary, depicting life and achievements of Shaheed Benazir Bhutto will also be shown on the occasion.
Separate camps have been set-up to accommodate the leaders and workers from all the four provinces, Gilgit-Biltistan, Northern areas and Azad Kashmir.
Reception camps have also been established. Leaders of the PPP and workers have already started reaching at Garhi Khuda Bux Bhutto.
A Mushaira has also been scheduled in front of mausoleum of Shaheed Mohtarama Benazir Bhutto on Wednesday afternoon.
Meanwhile, Deputy Commissioner Larkana Kashif Ali Tipu and SSP Larkana Tanvir Hussain Tunio on Tuesday told media men that special security and traffic arrangement will be made on the occasion.
They said over 7000 thousand police personnel, including Women police, Traffic police, special police commandos of Sindh Police and three hundred personnel of Shahbaz Rangers will also be deployed to ensure the law and order on the occasion.
The SSP Larkana told that senior rank officers will supervise and monitor the activities in Garhi Khuda Bux and Naudero vicinities.
An aerial surveillance at the surrounding the Naudero and Garhi Khuda Bux Bhutto will be carried out to monitor the activities, besides CCTV cameras will be installed at the different locations of Bhutto House Naudero, Garhi Khuda Bux and surrounding of Jalsa gah and parking areas.
On the occasion, Bomb Disposal squad, bomb detectors, scanning machines, jammers, snapper’s dogs, watch towers, 60 walk through gates with police vehicles and mobile will be setup for the security purpose.
All activities will be monitor by the high officials of Sindh Police and concerned officials.
DC Larkana said various medical and other welcome camps would be established and 60 fire brigades will be deployed at the various locations, added that the medical team along with equipped mobile hospitals and ambulance services will serve the public. – APP