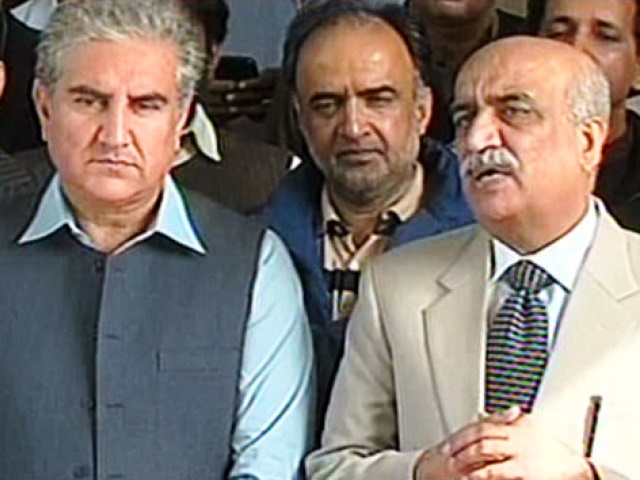 ISLAMABAD: Pakistan Peoples Party’s (PPP) Khursheed Shah, the opposition leader in the National Assembly, held a meeting with Pakistan Tehreek-e-Insaf’s (PTI) Shah Mahmood Qureshi in his chambers on Tuesday.
The meeting was also attended by PTI’s Shafqat Mahmood, Shireen Mazari and Rubina Khalid of the PPP.
According to reports, the two biggest opposition parties discussed the situation arising out of the submission of the Panama case Joint Investigation Team (JIT)’s report in the Supreme Court on Monday.
The opposition parties will soon request for a Joint Session of Parliament to discuss the JIT’s report and the matter of the prime minister’s resignation, sources added.
The JIT, in its final probe report into the Sharif family’s assets, held that the prime minister and his three children — Maryam, Hussain and Hasan — have accumulated wealth beyond their own known sources of income.
Even though the government has rejected the report, and vowed to challenge it ‘point by point’ in the Supreme Court next week, both PTI and PPP have called on the prime minister to step down from his post.
However, senior government officials stated unequivocally Monday evening that the topic of resignation has not even come up in their discussion.
Addressing the media after the meeting, Qureshi said the purpose of calling the joint is to remind the premier of the promise he made on the assembly’s floor.
He explained that the prime minister had vowed to step down if he is held guilty of corruption.
The PTI leader expressed satisfaction with the JIT report, saying they are on the same page with PPP and Muttahida Qaumi Movement-Pakistan.