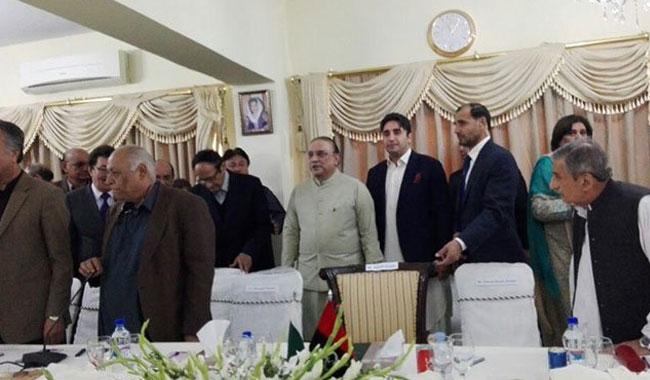 ISLAMABAD: Pakistan Peoples Party chairman Bilawal Bhutto Zardari said on Saturday that his party would extend support to military courts after obtaining legal opinion.
Addressing the media after PPP’s All Parties Conference on the issue of military courts took place, Farhatullah Babar said that heads of various political parties had opposed military courts. He said that even PPP co-chairman Asif Ali Zardari had opposed military courts.
“A committee has been established under Farooq H Naik,” he said. “If the need arises, we will prepare our own draft pertaining to military courts and will present it to opposition parties,” he said.
He said that Farooq H Naik would present amendments to the draft presented by the government.
PPP chairman Bilawal Bhutto Zardari said that the government had failed to implement the National Action Plan.
“The failure of the government to implement the National Action Plan is its criminal negligence,” he said. “We are against military courts. If the need to establish military courts arises, we will present our own draft after consultations with our own lawyers,” added the PPP chairman.
Addressing the APC, Zardari said that he wanted that their joint statement be presented in the parliament.
Jamiat Ulema-e-Islam (F) chief Maulana Fazlur Rehman participated in the conference with chief of Awami National Party Asfandyar Wali, and Muslim League Quaid chief Chaudhry Shujaat, Balochistan National Party chief Israrullah Zehri, Jamhoori Watan Party chief Aftab Sherpao, and a delegation from Pakistan Awami Tehreek, Majlis-e-Wahdat Muslimeen and Muttahida Qaumi Movement also in attendance.