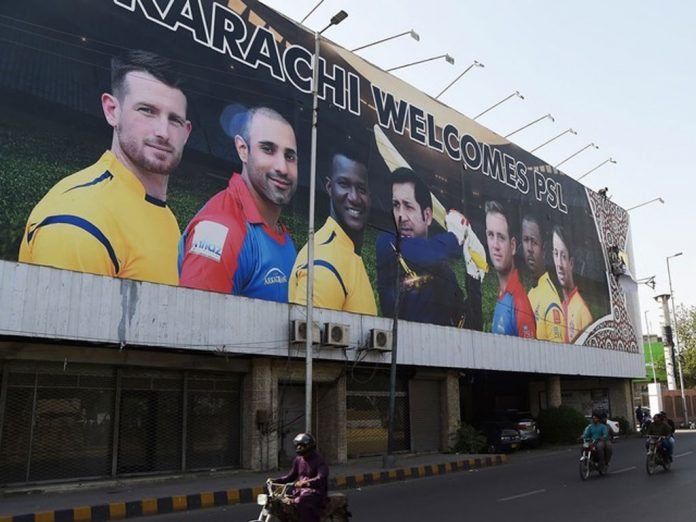 KARACHI: The excitement of cricket enthusiasts is at peak as the final of the Pakistan Super League (PSL) Season 4 is all set to be played on Sunday (today) between Peshawar Zalmi and Quetta Gladiators.
The preparations have been finalized for the occasion. It has been reported that President Dr Arif Alvi, Prime Minister Imran Khan and Chief of Army Staff (COAS) General Qamar Javed Bajwa are likely to grace the event with their presence.
The Sindh Chief Minister (CM) Syed Murad Ali Shah visited the National Stadium Karachi to inspect the arrangements and lauded the groundwork. The CM said the PSL has brought back liveliness in the city of lights.
The match will start at 08:00 PM (PST). Quetta Gladiators have an advantage over Peshawar Zalmi as they have defeated them thrice in the PSL 4 so far.
Both teams have played finals at least twice before. Quetta Gladiators are eagerly looking forward to win the trophy for the first time whereas Peshawar Zalmi have set an eye for victory in the tournament for second time.
The Pakistan Cricket Board (PCB) has planned an impressive closing ceremony of the Pakistan Super League 2019. A galaxy of international stars will perform at the closing ceremony.
The ceremony will be hosted by one of the most popular anchors and singers, Karachi’s very own Fakhar-e-Alam. Spain’s football star Carles Puyol will be a special guest at the closing ceremony.
The leading performers to display their talent include Abrar-ul-Haq, Aima Baig, Shuja Haider, Fawad Khan, Young Desi with the final performance of the ceremony by the heart-throb Junoon.
The PCB has also planned a spectacular fireworks display, which will start after final ends.