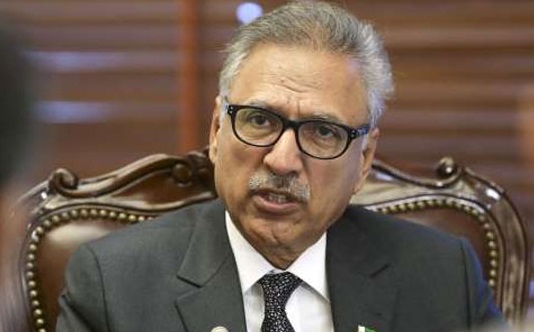 ISLAMABAD: President of Pakistan Dr Arif Alvi has finalised the 10th National Finance Commission on Tuesday, according to an official notification issued regarding the composition of the committee that will decide the share of fiscal resources earmarked for provinces.
According to the notification, Federal Finance Secretary Naveed Kamran Baloch will serve as an expert for the commission.
The Adviser to the PM on Finance and Revenue, Dr Abdul Hafeez Shaikh, will preside over the commission’s functions in the absence of a finance minister.
The NFC award will be considered effective from April 23, 2020.
The notification said that the Terms of Reference (TORs) have been issued for the commission.
The composition of the commission will be:
(1) Minister for Finance, Government of Pakistan — Chairman
(2) Minister for Finance, Government of Punjab — Member
(3) Minister for Finance, Government of Sindh — Member
(4) Minister for Finance, Government of Khyber Pakhtunkhwa — Member
(5) Minister for Finance, Government of Balochistan — Member
(6) Advisor to the Prime Minister on Finance and Revenue — Member
(7) Tariq Bajwa, Government of Punjab — Member
(8) Dr Asad Sayeed, Government of Sindh — Member
(9) Musharraf Rasool Cyan, Government of Khyber Pakhtunkhwa — Member
(10) Javed Jabbar, Government of Balochistan — Member
(11) Finance Secretary, Government of Pakistan — Official expert
In January 2019, an official notification from the Finance Division was issued on the government of Pakistan’s decision to reconvene the NFC.
Under the existing NFC arrangements, the Federal Divisible Pool (FDP) is distributed under the ratio of 57.5% to 42.5% among the provinces and the federal government, respectively.
Currently, the issue of the NFC award and the 18th Amendment have become a point of conflict between the government and the opposition parties.
By definition, the NFC Award is a constitutional obligation, which is clearly mentioned in the Article 160 of the 1973 Constitution.
The constitution has made mandatory for the government to compose the NFC Award at an interval extending not more than five years for the distribution of finances between the Centre and provinces.
According to Article 160 of the Constitution, after every five years the president will constitute the NFC for a period of five years.
Last year, President Dr Arif Alvi had reconstituted the ninth National Finance Commission (NFC) to formulate a new resource distribution formula between the Centre and federating units.
The 18th amendment to Pakistan’s constitution (passed in 2010) provides the provinces with significant decision-making autonomy.
The eighth NFC was constituted in 2010, which did not introduce any new award due to the previously-implemented one. The ninth NFC was constituted in April, 2015.