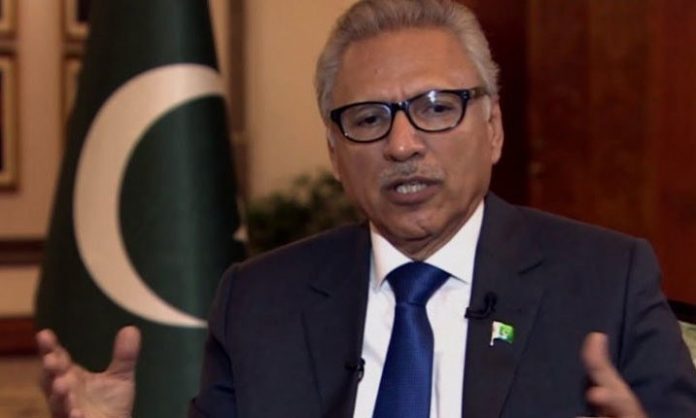 ISLAMABAD: President Dr Arif Alvi on Tuesday offered to play his role in the national dialogue to defuse political crisis in the country.

“The President’s house can stage dialogue only if all parties agree to talks, said President Arif Alvi while talking to reporters adding he has no objection to the early appointment of the new army chief.

A clear mandate is essential. He did not engage in any treachery and that anyone who had should be held accountable, said the President.

The President praised Foreign Minister Bilawal Bhutto Zardari for his efforts of rapprochement with the US but said that even ex-prime minister Imran Khan always talked about good relations with the country.

However, he added that the ex- premier only said ‘Absolutely Not’ on giving bases to the US.

President Alvi – who was appointed by Pakistan Tehreek-e-Insaf (PTI) government and apparently does not enjoy healthy relations with the incumbent coalition government which the PTI believes has been brought through a US-backed conspiracy – said that he has good relations with the prime minister and he had several meetings with him too.

“I signed 69 of 74 summaries sent by the current government,” he contended.

The president told the reporters that he had to leave for Hajj but extended his stay in the country for approval of the Finance Bill 2022-2023 by the Parliament, so he could sign it.

However, regarding the bill blocking the use of electronic voting machines (EVMs) in the elections, President Alvi said that he vouched for the use of the device and asked how he could sign that bill.

He claimed of stopping several bills of the PTI government as well but added that the issues were amicably resolved only through verbal communication.

To a question, the president said that he doesn’t say that there was a conspiracy against the PTI government to oust Imran Khan from power but the allegations he leveled must be probed.

“The world history is a witness that it takes ages for a conspiracy to be unveiled.”

He also offered to play his role in political crisis for bringing the stakeholders on table for ‘national dialogue’  if they want.

In response to a query about  a Supreme Court judge of suggesting invoking Article 6 against him, President Alvi said that everything in the country is considered to be against the Constitution.

The president said that he must be tried under Article 6 if he has violated the Constitution.

He also said that he has no objection to the early appointment of the new army chief.