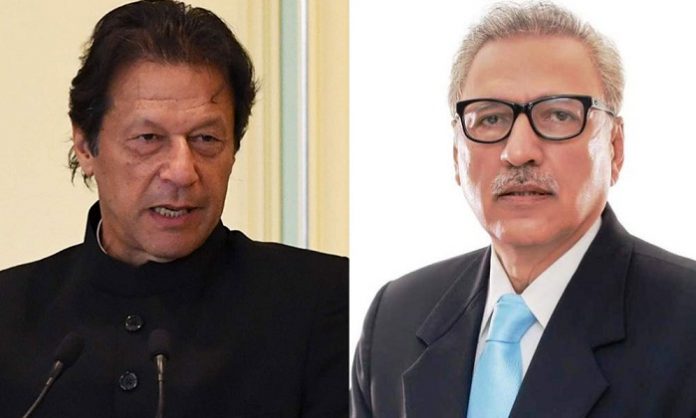 ISLAMABAD: President Dr Arif Alvi and Prime Minister Imran Khan have expressed grief and sorrow over loss of precious human lives in tragic crash of PIA aircraft in Karachi.
In a statement, the Prime Minister prayed higher status for the deceased and commiserated with the bereaved families.
He directed concerned authorities and departments to immediately undertake relief and rescue efforts and provide medical aid to the injured.
The Prime Minister also ordered immediate inquiry into the plane crash incident.
Imran Khan said he is shocked and saddened by the PIA plane crash.
President Dr. Arif Avli has expressed grief and sorrow over the loss of precious human lives in PIA plane crash incident.
In a message, he commiserated with the bereaved families.
In a tweet, he said I am in touch with PIA Chief Executive Officer Arshad Malik, who has left for Karachi and with the rescue and relief teams on ground as this is the priority right now.
Minister for Aviation Ghulam Sarwar Khan and Interior Minister Ijaz Ahmed Shah have expressed grief over the tragic crash of PIA plane and ordered Aircraft Accident Investigation Board for immediate inquiry into the incident.
Prime Minister’s Special Assistant on Information and Broadcasting, Asim Saleem Bajwa in his statement said that all available emergency resources are being utilized on the directions of Prime Minister Imran Khan in rescuing operation.
Army Chief General Qamar Javed Bajwa and Air Chief Marshal Mujahid Anwar Khan have too expressed grief over the crash of PIA Airbus 320 aircraft near Karachi airport, today.
In their separate messages, they said that all out support will be provided to civil administration in rescue and relief operation.
Sindh Governor Imran Ismail and Chief Minister Syed Murad Ali Shah have expressed deep grief and sorrow over the sad incident of plane crash near Karachi airport.
In their separate messages, they while expressing their sympathies with the affected families, directed all the concerned officials to provide best possible care to the injured.
They also directed the concerned authorities to carry out the rescue and relief operation in a coordinated manner.
Punjab Chief Minister Sardar Usman Buzdar has also expressed deep sorrow and grief over tragic accident.
Chief of Air Staff, Air Chief Marshal Mujahid Anwar Khan has expressed grief over the tragic air crash of PIA Airbus, 320 aircraft.
In a press release issued by Pakistan Air Force, the Air Chief said that PAF stands by PIA at this difficult time and extends all out support in Rescue Operation.