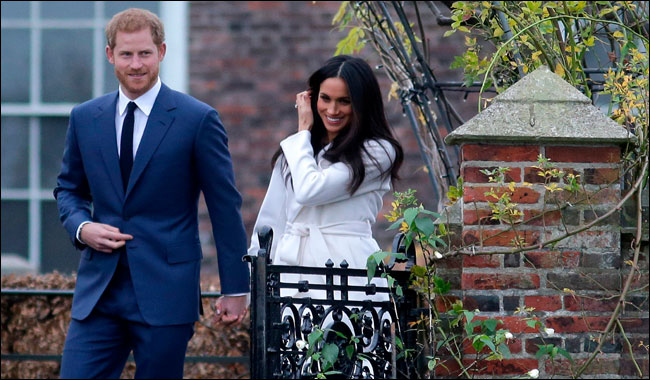 NOTTINGHAM: Prince Harry and his American actress fiancée Meghan Markle embarked Friday on their first joint royal visit since announcing their engagement this week.
Harry and Meghan, who broke the news of their forthcoming marriage on Monday, went on a walkabout in the central English city of Nottingham, meeting members of the public as a couple for the first time.
The two were due to visit an Aids Day charity fair at a museum and a school taking part in a programme to combat youth violence.
“Ms Markle cannot wait to meet many of the young people Prince Harry has told her so much about,” Harry´s spokesman Jason Knauf said before the visit.
In their engagement interview on Monday, Markle said she wanted to get to know the “different communities” which make up Britain.
The couple will be going on a six-month tour of Britain before their marriage in May at Windsor Castle, the weekend residence of Harry´s grandmother Queen Elizabeth II and the place where he was baptised.
Knauf said Harry had visited Nottingham many times, and he was “looking forward to introducing Ms Markle to a community that has become very special to him”.
Hundreds of people gathered in Nottingham to see the 33-year-old prince and his 36-year-old fiancée.
One well-wisher put up an American flag and another clutched a pink hot-water bottle on a chilly morning.
Harry and Meghan´s engagement followed a 16-month transatlantic romance between the prince and the US television star.
Harry, a one-time playboy and soldier who is now best known for his work on Aids awareness and veterans´ issues, revealed he proposed to Markle over a roast chicken dinner at his cottage in the grounds of his family´s sprawling Kensington Palace.
In their first interview marking their engagement, the pair revealed they were set up on a “blind date” in London in July last year. They quickly grew close, but tried to keep their relationship private.
Markle, who is mixed-race, divorced and an outspoken feminist, does not fit the mould of most British royal women and she admitted that some of the media coverage about her was “disheartening”.
But the queen has led a chorus of congratulations, saying she was “delighted for the couple”.
Harry has himself railed against the confines of royal life, recently admitting he came close to nervous breakdown in his 20s as he struggled to deal with the legacy of his mother Princess Diana´s death.
Harry is fifth in line to the throne and will soon be sixth when his brother Prince William´s wife Kate, the Duchess of Cambridge, gives birth to their third child in April.
Markle, who is best known for her role as a lawyer in the hit US television series “Suits”, has said she is giving up acting, applying for British citizenship and getting baptised into the Church of England.
She will also give up her work on gender quality for UN Women and take up royal charity duties instead, as she makes the transition from Hollywood celebrity glamour to a tradition-bound royal establishment.
Harry and Meghan had tried to keep their relationship private for as long as possible and he lashed out at the media when the first reports about it emerged.
In their engagement interview, he said media attention was “not easy for anybody”.
“But at the end of the day she chooses me and I choose her and whatever we have to tackle together or individually, we´ll always be together as a team,” he said.