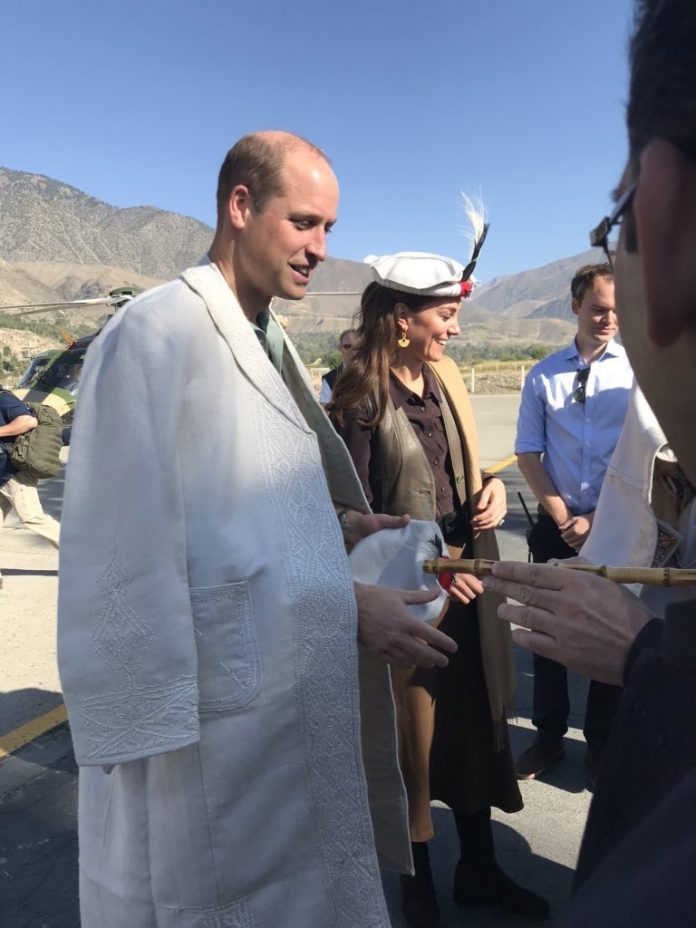 CHITRAL: Duke and Duchess of Cambridge Prince William and Kate Middleton have arrived in Chitral.
On arrival, they were received by area notables and high officials.
The royal couple is scheduled to visit Chiatibo Glacier to see devastating effects of climate change and witnessing the impact of flash flooding on local villages in Chitral valley. Later, the British prince and his wife will pay a visit to Kalash village.
The couple’s full slate of engagements on Wednesday follows an equally-busy second day of the tour, which included a visit to a girls’ school in Islamabad to highlight higher education for girls, meetings with President Arif Alvi and Prime Minister Imran Khan, and attending a “glittering reception,” which was hosted by British High Commissioner Tom Drew at the National Monument.
The duke used a speech at the historic Pakistan Monument to draw attention to “spectacular” glaciers melting in the area, which are melting away.
“Tomorrow we will be seeing some of these impacts first hand and meeting some of the communities adjusting to the new realities and new challenges that climate change has brought to their towns and villages,” William told a reception.
“I hope to learn what more we all can do to help prevent and mitigate this impending global catastrophe.”
Anticipated to walk around the glacier’s northern tip, the excursion will be the first time the royal couple have seen a melting glacier in person.
The couple hopes to highlight the effect of global warming during the visit, which will also see them travel to a village in a valley of Chitral.
Isolated communities in the area have suffered from flash flooding in recent years as a result of the glaciers melting.
Before they depart the district, they will visit a settlement of the Kalash people to learn about their community, heritage and traditions.
William and Kate arrived at the venue in style in a rickshaw decked out in traditional truck art.
Yesterday, the royal couple was warmly received by the premier, who hosted a special lunch for the royal guests.
Prior to meeting with the prime minister, the couple was welcomed by President Arif Alvi and his wife Samina Arif at Aiwan-i-Sadr.
The Duchess of Cambridge, who was earlier dressed in a royal blue kurta while visiting a girls school, changed into a green and white attire for the formal receptions.
William’s late mother, Diana, was a friend of PM Imran Khan and visited Pakistan twice – 1996 and 1997 – to help raise awareness and funds for the Shaukat Khanum Memorial Cancer Hospital.
The royal couple was accompanied by Thomas Drew, the British High Commissioner to Pakistan; Simon Case, the Principal Private Secretary to the Duke; and Christian Jones, the Communications Secretary to the Duke and Duchess of Cambridge.
The president appreciated the royal couple for their endeavors to raise awareness about mental health, climate change, and poverty alleviation, said a press release by the president’s secretariat.
Prince William expressed his gratitude to the president for the warm welcome and hospitality extended to him and his entourage. The royal couple lauded the initiatives undertaken by Pakistan’s government to combat climate change and to alleviate poverty, added the statement.
The visit comes 13 years after Charles and Camilla – the Prince of Wales and the Duchess of Cornwell – toured the country in 2006. Pakistan still vividly remembers the late Princess Diana’s visit in 1996.
The official statement also said that throughout the tour the couple would visit programmes which empower young people and see how communities in Pakistan are responding and adapting to the effects of climate change.