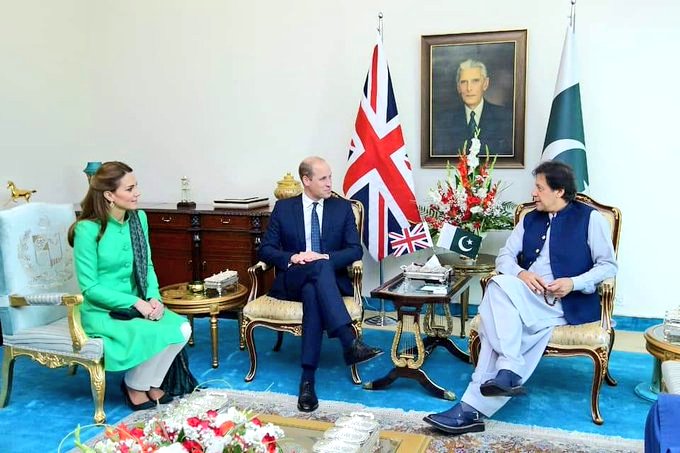 ISLAMABAD: The Duke and Duchess of Cambridge, Prince William and Kate Middleton called on Prime Minister Imran Khan in Islamabad on Tuesday.
On arrival at the Prime Minister House, Prime Minister Imran Khan welcomed the Royal couple.
Earlier today, Duke and Duchess of Cambridge, Prince William and Kate Middleton, signaled their support for women’s education in Pakistan by making a girls school the first stop.
The couple both wore blue for the visit to the school in the capital Islamabad, with the Duchess of Cambridge draping a long scarf, or dupatta, over the shoulder of her royal blue shalwar kameez – a traditional Pakistani long shirt with trousers.
Education official Khadija Bakhtiar told foreign news agency that the couple helped some of the students solve problems.
“Both wanted to engage in a natural way… so it was a very nice” visit, she said.
William and Kate spent roughly half an hour at the government-run school, which has an estimated 1,000 students from first to 12th grade, before they were waved off by smiling students.
After their visit to the school, they arrived at Trail 5, Margalla to attend an event regarding environmental protection. Strict security arrangements were made prior to their arrival.
On Monday, the British royal couple arrived in Pakistan on a five-day tour as they are “looking forward to building a lasting friendship with the people of Pakistan.”
Foreign Minister Shah Mahmood Qureshi, British High Commissioner in Pakistan Thomas Drew and other high level officials accorded a warm welcome to Prince William and Kate Middleton upon their arrival.
William and Kate disembarked from the Royal Air Force plane onto a red carpet that had been rolled out for them.
A team of more than 40 doctors, paramedics and medical staff has been included alongside the security squad of the royal couple. More than 40 journalists also arrived with Prince William and Kate Middleton.
The visit comes 13 years after Charles and Camilla – the Prince of Wales and the Duchess of Cornwell – toured the country in 2006. Pakistan still vividly remembers the late Princess Diana’s visit in 1996.
The official statement also said that throughout the tour the couple would visit programmes which empower young people and see how communities in Pakistan are responding and adapting to the effects of climate change. …Agencies