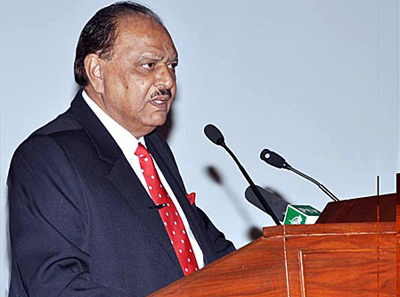 ISLAMABAD: President Mamnoon Hussain on Thursday said the progress of a country cannot be achieved without promotion of its national language.
Addressing at the foundation-laying ceremony of Federal Urdu University for Science and Technology here at the Aiwan-e-Sadr, the President said all developed nations in the world had achieved progress by promoting their national languages.
The new campus of Federal Urdu University for Science and Technology, presently situated at the Zero Point, Islamabad, will been constructed near Kurri Road for which 800 kanal land has been acquired.
President Mamnoon said using national language Urdu as the medium of instruction at educational institutes would enable the youth make optimum utilization of their capabilities and express their creativity without any inhibitions.
He said Urdu University was a dream come true based on the spirit of the establishment of Pakistan
Also, its main objective is to promote national language and liberate the new generation from the shackles of alien languages, he added.
He recalled the services of Father of Urdu Moulvi Abdul Haq who fought relentlessly for the preservation of Urdu language.
He appreciated that certain universities of the country had realized the importance of Urdu and were translating research work without any compromise in terms of quality.
He called upon the Urdu University to translate the modern educational asset in national language and work for the promotion of research-based education.
President Mamnoon said that the government was extending support to the Federal Urdu University and the Aiwan-e-Sadr had also contributed financially after cutting down its expenses.
He expressed hope that the campus would be constructed soon providing students a platform of quality education in national language.
The President said faculty was the most important part of a university and urged upon the teachers to set high standards as role models for their students by refraining from grouping, plagiarism and corruption.
He also called upon the students to shun lingual and ethnic prejudices and focus their energies on studies only. – APP