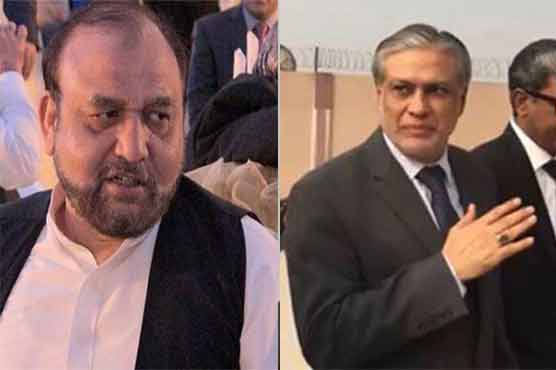 ISLAMABAD: An accountability court in Islamabad resumed on Thursday the hearing of a reference against former finance minister Ishaq Dar for amassing assets beyond his known sources of income.
Joint Investigation Team (JIT) head Additional Director-General (AIG) of the Federal Investigation Agency (FIA) Wajid Zia and investigating officer Nadir Abbas appeared before the court to record their statements.
However, the testimony of the JIT head, a prosecution witness, could not be recorded in the absence of the original JIT report – currently in the possession of Supreme Court.
Following the hearing, the court adjourned the case till February 12.
The accountability court had sent an application requesting the requisition of JIT report submitted in SC. In a previous hearing on January 31, National Accountability Bureau’s (NAB) prosecutor Imran Shafique had said that SC constituted a JIT to investigate the Panama leaks on April 20, 2017.
He added that the JIT collected voluminous material, recorded numerous statements, prepared its exhaustive report and submitted before the SC.
Shafique had informed the court that the JIT report is the part of the reference against Dar as the top court had directed to prepare and file reference(s) on the basis of evidence collected by JIT. He added that Zia is a witness in the reference but the evidence and the original report of JIT along with entire set of volumes is lying with SC.
“JIT report has to be tendered in evidence of PW [prosecution witness] Mr. Wajid Zia being mandatory requirement of law,” he said.
“Therefore, he said, it is in the interest of justice that the original JIT report may please be requisitioned from the Registrar office” of the Supreme Court.
He added that JIT report is the most important & essential document prepared and signed by Zia and bringing it on record would promote ends of justice for determination of the reference. He has prayed the court that the application be accepted.