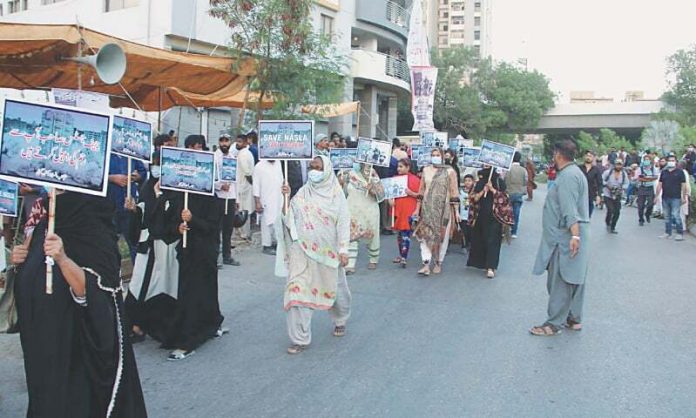 KARACHI: Police on Friday baton-charged the people, who staged a protest against the demolition of Nasla Tower, a residential building located in Sindhi Muslim Society, recently declared illegal by the Supreme Court.

The protestors tried to enter the building to halt the demolition process of the building. The police tried to stop the protestors and later restored to baton-charge and fired gas shells as the protestors kept on coming. The deputy chairman ABAD and several other people got injured in the shelling.

Earlier, Mohsin Shekhani, chairman ABAD reached the demolition site to show solidarity with the protestors. Talking to the newsmen, Shekhani said everyone is afraid of demolition of their buildings, one should tell us from whom we have to take permission for the construction in Karachi?

We have stopped all the construction projects in Karachi as we don’t have any other option. “We have to convince our investors.” He announced to expand the protest across the country.

Earlier in the day, Chief Justice of Pakistan (CJP) Justice Gulzar Ahmed reprimand Jamaat Islami Karachi Amir, Hafiz Naeem-ur-Rehman Butt in the courtroom when tried to speak during the hearing of the Nasla Tower demolition case in Karachi’s SC Registry.