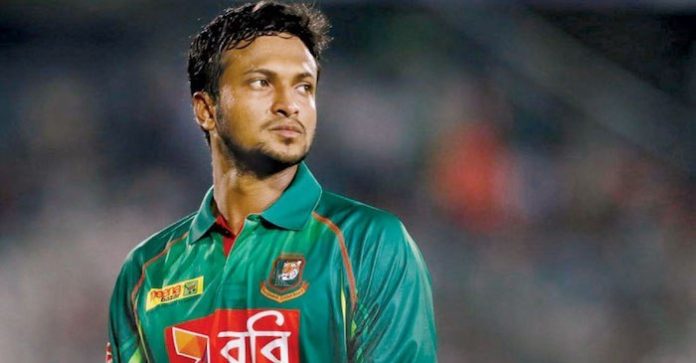 MAGURA: Hundreds of supporters of Bangladesh’s cricket captain Shakib Al Hasan protested on Wednesday after he was banned for two years by the sport’s governing body for not declaring attempts to bribe him.
The ban on the 32-year-old superstar was announced on Tuesday by the International Cricket Council (ICC), which suspended one year of the punishment after Shakib “accepted three charges of breaching the ICC Anti-Corruption Code”.
Shakib made a public appeal for support after being banned, unleashing a flood of angry anti-ICC social media posts from his fans.
Police said about 700 people took to the streets in Shakib’s hometown of Magura, demanding the ICC revoke the ban which came on the eve of Bangladesh’s departure for a tour of India.
“The protesters shouted slogans and marched along a highway. They also formed a human chain as part of their action against the ICC decision,” said Saiful Islam, police chief in the western town.
Protesters carried placards saying that Shakib was the victim of a “conspiracy”. Smaller protests were held in the capital Dhaka, police said.
The Test and T20 captain accepted charges that he had failed to disclose details of approaches made over a tri-nation series between Bangladesh, Sri Lanka and Zimbabwe in 2018 as well as the 2018 Indian Premier League (IPL).
Shakib will be eligible to return from October 29 next year but he is ruled out of the T20 World Cup in Australia which starts October 8.