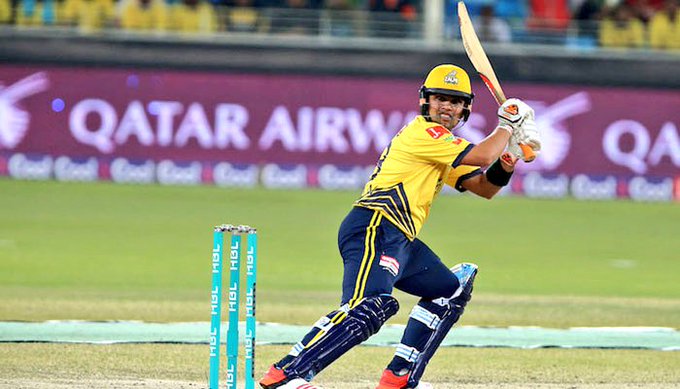 KARACHI: Peshawar Zalmi have defeated Quetta Gladiators by six wickets in fourth match of Pakistan Super League V at National Stadium in Karachi today (Saturday).
Kamran Akmal scored first century of the event on 54 balls with 13 fours and 4 sixes.
For Gladiators, Fawad Ahmed got three wickets, Mills one and Sohail Khan clinched one wicket.
Earlier, Quetta Gladiators set a target of 149 runs for Peshawar Zalmi after being put into bat by skipper Darren Sammy.
Gladiators scored 148 runs after losing five wickets in 20 overs. Jason Roy top-scored with 73 runs off 57 deliveries (6×4, 1×6). Skipper Sarfraz Ahmed made 41 runs off 25 balls with five fours and one six. Zalmi’s Wahab Riaz picked up two wickets for 21 runs in four overs.
Jason Roy was the highest scorer for the Gladiators taking 73 runs from 57 balls not out, keeping a steady head till the end of the first innings.
Gladiators’ Shane Watson was the first casualty early on in the day, managing to score only eight runs from 10 balls before being sent back to the pavilion by Wahab Riaz. Meanwhile, Ahmed Shehzad was also sent packing, scoring 12 runs from 12 balls.
Peshawar Zalmi on Saturday had won the toss and decided to field first in the fourth game of Pakistan Super League 2020. The match will be played at Karachi’s National Stadium.
Captain Darren Sammy, after winning the toss, said that the pitch has been favouring bowlers and thus the team will bowl first.
Gladiators’ captain Sarfaraz Ahmed said that he would have chosen to bowl first as well, but now his team will try and put up a big total and defend it at the second inning.