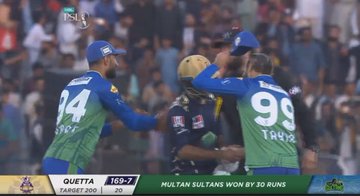 MULTAN: Table-toppers Multan Sultans further strengthened their position at the top of the Pakistan Super League 2020 points table with a comfortable 30-run win over reigning champions Quetta Gladiators at the Multan Cricket Stadium on Saturday.
Left-handed middle order batsman Rilee Rossouw (man-of-the-match) was the star for the Sultans as his blazing century helped set-up the victory for the home side.
Chasing 200 runs for a win, the Gladiators were restricted to 169 for seven by Sultans. Opener Shane Watson fought a lone battle for his side with a whirlwind 80 off 41 balls. Watson hit seven fours and seven sixes before his dismissal in the 16th over derailed Gladiators’ chase.
Jason Roy who opened the innings with Watson scored 30 off 27 balls; no other batsman could offer much to the disciplined Sultans attack who held their nerve on a batting friendly pitch.
Fast bowler Bilawal Bhatti drafted in the eleven in place of Shahid Afridi took three while veteran leg-spinner Imran Tahir took two wickets.
Sultans recorded wins in all three home games of the PSL 2020 Multan-leg, while they also defeated Lahore Qalandars in Lahore, earlier in the tournament. There four wins have given them eight points and the top position in the six-team competition.
Earlier, Rossouw’s unbeaten century was the fastest in PSL history; the left-hander who was part of Gladiators’ title winning team last year turned the tables on his former team in spectacular fashion.
Rossouw hit six towering sixes and 10 fours in his 44-ball knock, he reached his century off 43 balls to establish a new PSL fastest century record.
Rossouw added 139 runs for the fourth wicket with his captain Shan Masood (46 off 32 balls, six fours), the partnership was compiled off a mere 64 balls. The two came together at the fall of Moeen Ali’s (6) wicket with the total reading 48 for three in 7.5 overs.
Their alliance though changed the complexion of the game with Rossouw doing the bulk of damage with a stunning onslaught that left the Gladiators bowlers helpless.
Mohammad Nawaz took one for 16 for the Gladiators, Mohammad Hasnain, Ben Cutting, Naseem Shah and Sohail Khan all took one wicket each but were all taken for plenty of runs by Rossouw and co.