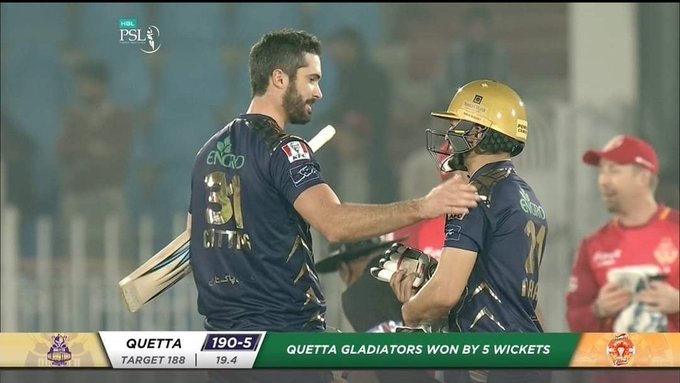 RAWALPINDI: Quetta Gladiators inflicted a five-wicket defeat on Islamabad United in a nail-biting contest of Pakistan Super League-V (PSL-V) at the Pindi Cricket Stadium on Thursday.
Chasing a respectable target of 188 runs set for them by two-time winners United, defending champions Gladiators finished with a score of 190-5 with two balls to spare in the ninth match of the tournament.
Although Jason Roy who kept the momentum going for the Gladiators with his 38-ball 50 until he was dismissed in the 12th over, it was player of the match Ben Cutting (42 off 17) who saw the team home with his two consecutive sixes in the last over.
Skipper Sarfaraz Ahmed pitched in with a 20-ball 33 and Mohammad Nawaz with a 20-ball 25.
Earlier, Islamabad United finished with a score of 187-7 after being sent in to bat.
The team looked to be in a precarious position after losing three wickets during the first few overs of the match. But Colin Ingram pulled his side back from the brink, scoring a cool 63 runs off 40 balls.
Shadab Khan also contributed to the final tally of 187 runs by scoring 39 runs from 25 balls.
Earlier, the Gladiators had won the toss and opted to field first.
Luke Ronchi and Dawid Malan were dismissed during the first and third overs, respectively, courtesy excellent bowling by Naseem Shah.
The two rivals were playing against each other exactly a week after the fifth PSL edition got underway.