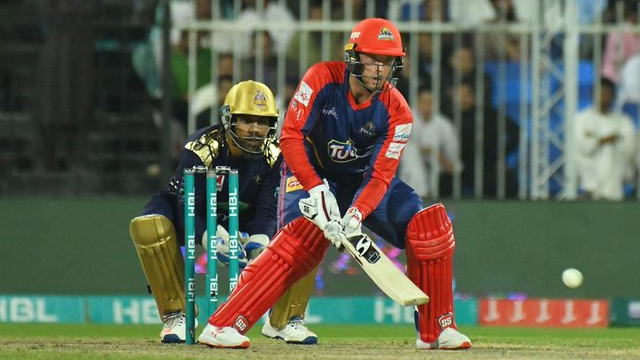 SHARJAH: A swashbuckling knock of 127* by Colin Ingram guided Karachi Kings to an easy six-wicket victory over Quetta Gladiator in the 15th match of the fourth edition of the Pakistan Super League (PSL-4) at the Sharjah Cricket Stadium on Sunday.
Chasing 187, Karachi Kings were 4 for 2 before Colin Ingram s record-breaking knock stunned Quetta Gladiators and took his side home with six wickets and eight balls to spare. The left-hand batsman smashed 12 fours and eight sixes during his unbeaten 59-ball 127, surpassing Sharjeel Khan s 117 as the highest individual score in the PSL history.
After being put in, Umar Akmal s 37-ball 55 led Gladiators charge for the most part of the innings. He was well supported by Rilee Rossouw and the two added 63 for the third wicket in just 6.5 overs. Umar eventually fell to Aamer Yamin on the third ball of the 19th over with score still 156, but late hitting from Anwar Ali took Gladiators to 186. However, that didn t prove enough in the end.
With no other batsman in the side crossing 20, Ingram was the undisputed star of the day. He came to the crease in the second over of the chase, with both Babar Azam and Colin Munro back in the hut. The first ten balls he faced produced only nine runs but the next 21 brought 41. Nawaz was carted for three successive sixes in the 14th over, while one off Mudassar went out of the stadium. With nine needed off ten balls, Ingram struck Anwar for a four and a six to take Kings to an improbable victory.
Babar and Munro are two of the best batsman in T20 cricket. And if the side is chasing a stiff target, one would expect a big contribution from at least one of them. However, Sohail Tanvir removed Babar on the first ball of the chase, while Nawaz accounted for Munro when the batsman has made just three.
Despite the loss, Gladiators are still at the top of the points table with eight points. But Kings rose from the bottom of the table to the fifth spot, tied on points with Lahore Qalandars with both teams having two wins from five games.