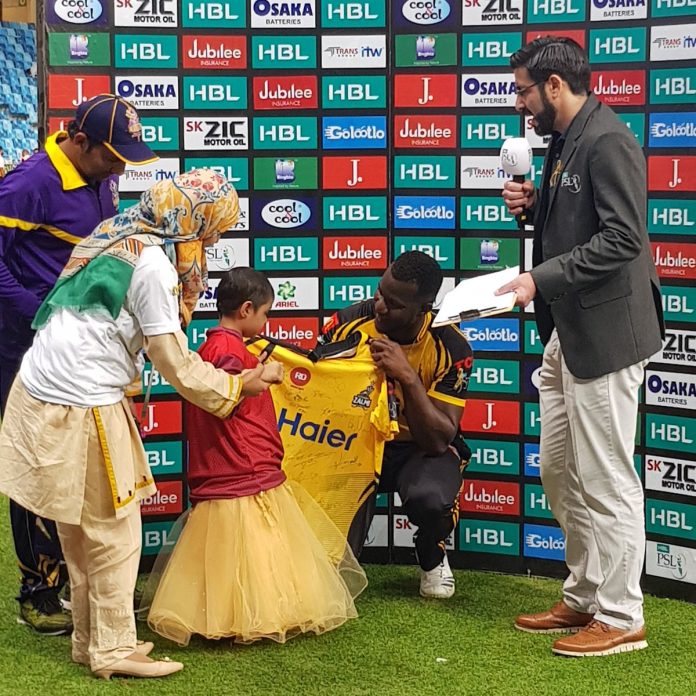 DUBAI: The fourth edition of Pakistan Super League (PSL4) observed International Childhood Cancer Day with an aim to help create awareness about the decease here at the Dubai Cricket Stadium on Friday.
The event came alive with the adorable Ayesha Noor (cancer patient) who appeared as a special guest and met the Gladiators’captain Sarfraz Ahmed and Zalmi’s skipper Daren Summy after the game between Peshawar Zalmi and Quetta Gladiators. Later, Noor was joined man of the match Umar Akmal and photographed .
Pakistan Super League shared the moments on its Twitter account, paying gratitude to both PSL 4 teams Peshawar Zalmi and Quetta Gladiators for their support.
International Childhood Cancer Day (ICCD) is observed around the world each year on February 15. The core objective of this global health event, which was founded in 2002 by Childhood Cancer International (CCI), is to help create awareness about childhood cancer.
The theme for this year’s ICCD is ‘No More Pain’ and ‘No More Loss’ for children, survivors and their families. While PSL 2019 will observe the Breast Cancer Awareness Day on March 10.
Quetta Gladiators thrashed Peshawar Zalmi by 6 wickets in their 2019 Pakistan Super League showdown at the Dubai Cricket Stadium on Friday.