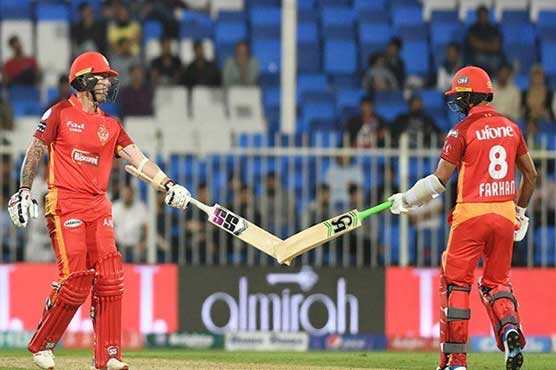 KARACHI: Islamabad United defeated Karachi Kings by four wickets in the in first eliminator of the fourth edition of the Pakistan Super League (PSL) at the National Stadium Karachi on Thursday.
Playing first, Karachi Kings set a victory target of 162 runs for Islamabad United. Karachi Kings had won the toss and elected to bat first but failed to capitalise on the good start and crumbled towards the end as they could only manage to post 161 runs in 20 overs.
Mohammad Musa was the chief destructor with the ball as he picked up three wickets for Islamabad United. Karachi Kings – 161/9 after 20 overs.
The winning team will play Peshawar Zalmi, who lost the Qualifier against Quetta Gladiators, to book a place in the final. The losing side will be eliminated from the tournament.
Islamabad United, winners in 2016 and 2018, had defeated Karachi Kings in both league matches of the PSL 4. United were equal on points with their rivals in the league phase with 10 in as many games, finished ahead of Kings on better net run-rate.
On their way to the title in the first edition, Islamabad beat Karachi in the Eliminator by a convincing nine-wicket margin when Brad Haddin (52 not out) and Luke Ronchi (50 not out) helped them chase down a modest target of 111 runs.
But, Karachi reversed the result in 2017 when the two teams again met in the Eliminator, beating Islamabad by 44 runs at the back of some superb bowling by Mohammad Amir, Imad Wasim and Usama Mir – all taking three wickets.
Islamabad again had the better of Karachi in the third edition on their way to the title, winning by eight wickets. Ronchi once again was Karachi’s nemesis, by scoring a whirlwind 94.