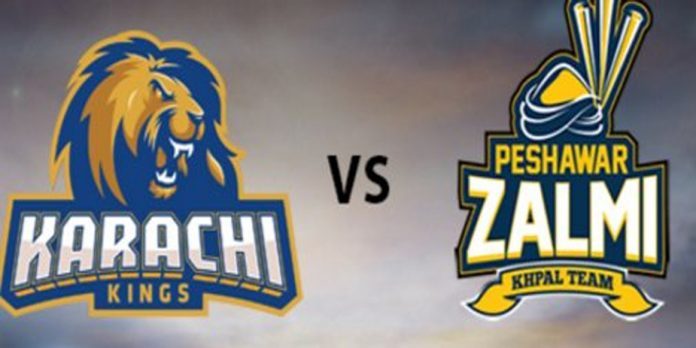 KARACHI: Peshawar Zalmi and Karachi Kings will face off in today’s second fixture at the National Stadium, in a low-stakes clash that doesn’t involve a do-or-die situation for either team.
Karachi’s thrilling one-run victory against top-ranked Quetta Gladiators last night rendered both of today’s matches as virtual dead rubber contests: Lahore Qalandars and Multan Sultans have nothing to gain or lose from their fixture today, which is scheduled to start at 2pm. Lahore were eliminated by Karachi’s last-ball win over Quetta, whereas Multan were knocked out earlier in the tournament.
Quetta Gladiators, Peshawar Zalmi, Islamabad United and Karachi Kings are safely through to the playoffs.
For Karachi Kings, however, there is a chance to end up among the top two teams on the points table if they beat Peshawar Zalmi comprehensively tonight; either by winning by approximately 85 runs or by chasing down the target within nine overs.
Shinwari’s last over turns the table on Gladiators as Kings win thriller by one run
Fans in Karachi will be waiting to see the charismatic Darren Sammy and his team in action, after exactly around a year ago when Peshawar Zalmi faced and lost to Islamabad United in the final of the Pakistan Super League 2018 in cricket’s homecoming to the National Stadium.
Karachi Kings would have been boosted by yesterday’s dramatic win and with their newly gained momentum, another great contest looks to be on the cards.