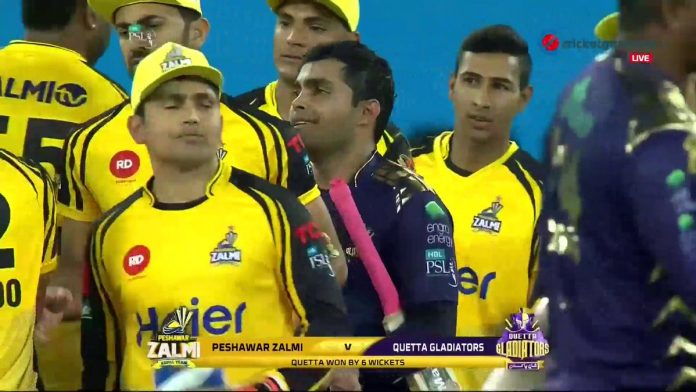 DUBAI: An unbeaten 75 runs from Umar Akmal helped Quetta Gladiators to beat Peshawar Zalmi by six wickets in their first match of Pakistan Super League (PSL) at Dubai International Cricket Stadium on Friday.
Quetta Gladiators had won the toss and opted to bowl against Peshawar Zalmi.
Quetta Gladiator lost its first wicket of Ahmed Shehzad on the very first ball of the second innings delivered by Hassan Ali. A booming inswinger by Ali left the batsman completely clueless.
Second wicket fell at the end of fourth over being bowled by Umaid Asif. Shane Watson wanted more from this over but perishes in the process as he was caught by Hassan Ali at long-on.
Rilee Rossouw was the third one to went down on the ball of Wahab Riaz in the eighth over.The batsman went for the on-the-up drive and miscued it straight to Sohaib Maqsood at mid-off.
Quetta Gladiators lost their captain Sarfraz Ahmed in the 17th over. Sarfraz made 37 runs. He was caught by Sammy on the bowling of Wahab Riaz.
Zalmi lost four wickets and tried harder but really could not push the run-rate over 8.
Wicket of Fletcher was the first one to fall on the delivery made by Mohammad Irfan. He was followed by Kamran Akmal who was caught by Rossouw off Mohammad Nawaz’s ball.
The third player down was Sohaib Maqsood who fell prey to the delivery of Ghula Mudassar.The fourth man K A Pollard was taken by Mohammad Nawaz.
L A Dawson and Misbahul Haq were the last pair on crease who remained not out.
Quetta will be pleased with their bowling effort as they never allowed the opposition batsmen to take the game away. The surface still looks good for batting and Sarfaraz would fancy his boys chasing this down.
Peshawar Zalmi (Playing XI): Kamran Akmal(w), Andre Fletcher, Sohaib Maqsood, Misbah-ul-Haq, Kieron Pollard, Liam Dawson, Daren Sammy(c), Wahab Riaz, Hasan Ali, Umaid Asif, Sameen Gul
Quetta Gladiators (Playing XI): Ahmed Shehzad, Dwayne Smith, Shane Watson, Rilee Rossouw, Umar Akmal, Sarfaraz Ahmed(w/c), Mohammad Nawaz, Ghulam Mudassar, Sohail Tanvir, Fawad Ahmed, Mohammad Irfan Jnr
Earlier in the first match of the day, Karachi Kings defeated Multan Sultans by 7 runs. Karachi Kings had set 184-run target for Multan Sultans.
Spell of Mohammad Amir neutralised the Sultans charge in later part of the match. He managed to grab four wickets, including Shahid Afridi’s (14) key wicket.
Later, Sohail Khan restricted the tail-enders from making any significant progress when they needed 16 runs off 6 in the death over. The right-arm fast bowler missed his hat-trick in the crucial over.
On Thursday, in the opening match of PSL in Dubai, Islamabad United beat Lahore Qalandars by 5 wickets. Batting first, Lahore Qalandars scored 171 runs for the loss of eight wickets in the allotted 20 overs.
Islamabad United chased down the target in the last over with 5 wickets remaining.
Faheem Ashraf of Islamabad United who took two wickets and scored 23 runs was declared man of the match.