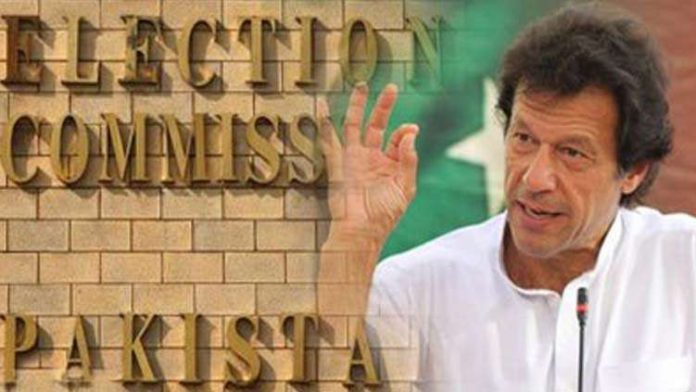 ISLAMABAD: The Pakistan Tehreek-e-Insaaf (PTI) has challenged the Election Commission of Pakistan’s (ECP) verdict incriminating the party of deliberately taking funds from prohibited sources in the Islamabad High Court.

The case pertains to the PTI’s funding before the year 2014, especially in 2013 when the results of general elections turned the PTI into a major political force in Parliament from a one-seat party.

According to a petition filed on Wednesday, the PTI requested the court to “suspend the operation of the Impugned Fact Finding Report dated 02.08.2022 of the ECP” as they alleged that the report “is perverse, incorrect and in excess of authority and jurisdiction.”

The party also prayed to the court to suspend the show cause notice issued by the commission.

In its application, the PTI also prayed to the court to declare that any action suggested by the ECP is beyond authority. It also wants the court to announce that no action can be taken on the basis of the ECP’s fact finding report.

On August 5, a three-member ECP bench headed by CEC announced the verdict reserved in a prohibited funding case against the PTI.

In a unanimous decision, the bench declared that the PTI ‘knowingly and willfully’ received funding from prohibited sources, including foreign nationals.

The ECP bench in its ruling said that funding from Wootton Cricket, owned by Abraaj Group founder Arif Naqvi, was from a prohibited source.

It declared that funding received from over 350 foreign companies and 34 foreign nationals — many of them of Indian origin — was also from prohibited sources. The funds were raised in the United States, the United Kingdom, and Canada.

The commission declared the funding received from Romitta Shetty from Singapore also comes under funding from prohibited sources.

The ECP bench also found the funding certificates submitted by PTI chairman Imran Khan for funding from 2008-2013 to be incorrect.

In its decision, the three-member bench asked the commission to issue a notice to the PTI asking why the prohibited funds may not be confiscated.

“The office is also directed to initiate any other action under the law, in the light of this order of the commission, including forwarding the case to the Federal Government,” the order reads.

Following the ECP ruling, a show-caused notice has reportedly been serviced on the PTI. Experts say the next step for the government is to file a reference against the PTI under Article 17.