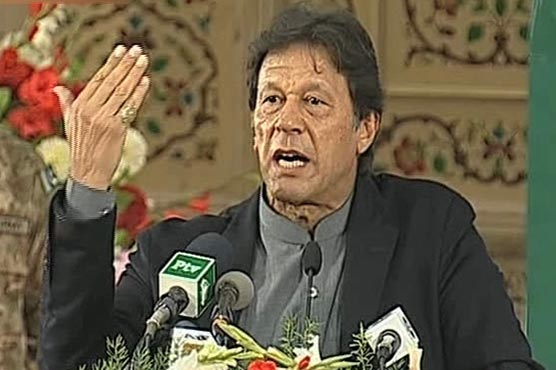 LAHORE: Prime Minister Imran Khan on Saturday said that politicians ruled over Pakistan but made properties abroad.
“The rulers continued to loot the country. Why did the nation tolerated them?” he questioned while addressing at the special ceremony in Lahore to highlight the performance of PTI’s Punjab Government in first 100 days.
“PTI government will not back down from holding the corrupt leaders accountable. We will not compromise over corruption. The furture of the country will be at stake if those involved in corruption are not jailed,” he declared.
“Today s difficulties are the result of past mistakes. How can those worry about Pakistan who have their vested interests abroad,” he emphasized.
The premier assured that PTI Government will give progress to Punjab province by taking it out of its present difficult situation.
We will ensure rights of the people and all resources are being utilized to uplift the living standard of masses., he added.
“In past, half of whole provincial budget was spent on development of Lahore city alone. Even funds for labor community were diverted to Lahore,” he said.
PM Khan asserted that our export is worth $24billion only which is far less than small states like Singapore.
He said that pollution level of Lahore has risen to dangerous level due to our previous poor industrial policies.
Prime Minister appreciated Punjab Cheif Minsiter Sardar Usman Buzdar’s honesty and Punjab Finance Minister for a crisp presentation about the provincial government’s performance.
Several other provincial and federal Ministers are also present on the occasion.